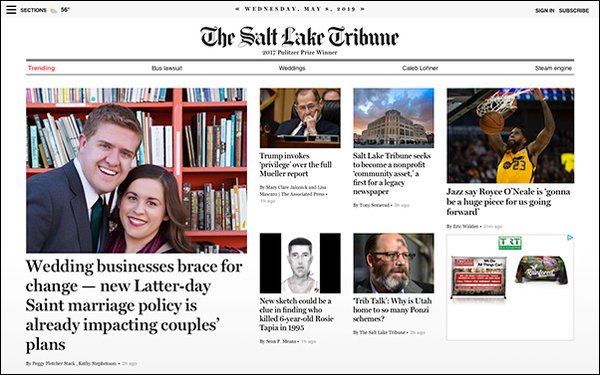 The Salt Lake Tribune is seeking federal approval to become a nonprofit operation sustained by donations after years of heavy financial losses.

Paul Huntsman, CEO of his family’s investment firm, Huntsman Family Investments, said his lawyers have talked to the IRS about changing Utah’s biggest newspaper from a privately owned business to a community asset. Huntsman bought the newspaper from Digital First Media in 2016.

Huntsman said nonprofit status is the only way to restore financial stability to the newspaper, which loses millions of dollars a year following a steep decline in advertising and circulation, the newspaper reported.

The Tribune has tried every strategy in the current newspaper publisher’s playbook to restore profitability amid a secular decline in print revenue as readers spend more time consuming digital media.

The newspaper put up a paywall to charge readers for content, which boosted online revenue, but not enough to make up for losses in other areas.

In an all-too-common experience for local newspapers, it fired one-third of its staff to cut costs last year. Its newsroom now has 60 employees, down from 148 in 2011.

The Tribune looked at other newspapers for guidance, including the possibility of seeking nonprofit support. The Philadelphia Inquirer is part of the Philadelphia Media Network, which is owned by the philanthropic Philadelphia Foundation. The Poynter Institute for Media Studies has owned the Tampa Bay Times since Nelson Poynter bequeathed his stock in its parent company to the nonprofit group.

Huntsman also talked to the John S. and James L. Knight Foundation, which pledged $300 million over five years for local news, and has collaborated with nonprofits like ProPublica on reporting projects.

It’s not clear how becoming a nonprofit will affect certain operations, such as the newspaper’s editorial page. It may not be able to endorse political candidates, which is standard practice for most newspapers.

“We have to survive,” Tribune editor Jennifer Napier-Pearce said. “Our community would be so much worse off without this publication, let alone independent journalism."

She's right. Communities suffer when they lose a local newspaper, with one study claiming that public corruption becomes more pervasive in regions without a press watchdog. Our democracy depends on a free press, and unfortunately, tech companies have too much power to enforce arbitrary censorship.

If the Salt Lake Tribune does become a nonprofit entity, other local newspapers may follow its example — and try to create a sustainable source of independent news. The key is having an endowment big enough to fund operations, like universities that depend on a mix of tuition fees, investments and private donations to function.

Perhaps companies like Facebook and Google could start paying dividends to investors, including newspaper endowments that will depend on a steady source of investment income.

Foundations will need a better source of income, especially when the Federal Reserve pushes interest rates into negative territory during the next recession and more private newspapers fail.