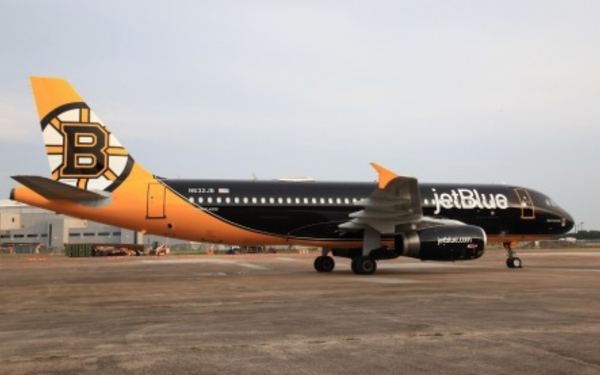 JetBlue is the “official airline of the Boston Bruins” and has created a plane design to affirm that relationship.

The new paint scheme features a large-scale version of the Bruins’ iconic spoked-B logo on the tailfin, a nod to the often-used reference to Boston as “the hub of the universe.” The logo’s central “B” encircled by spokes mirrors the central role that Boston has played in JetBlue’s network from the very beginning. Next to the boarding door, customers will be greeted with “Boston’s Team Since 1924.”

JetBlue is also the official airline sponsor for the city’s three other major sports teams: the Boston Celtics, Boston Red Sox and New England Patriots. JetBlue has also been the Official Airline of TD Garden and Presenting Sponsor of the entrance experience since 2010.

The airline is the leading carrier in Boston in number of flights, customers carried and nonstop destinations served. The airline has 3,800+ Boston-based crew members.