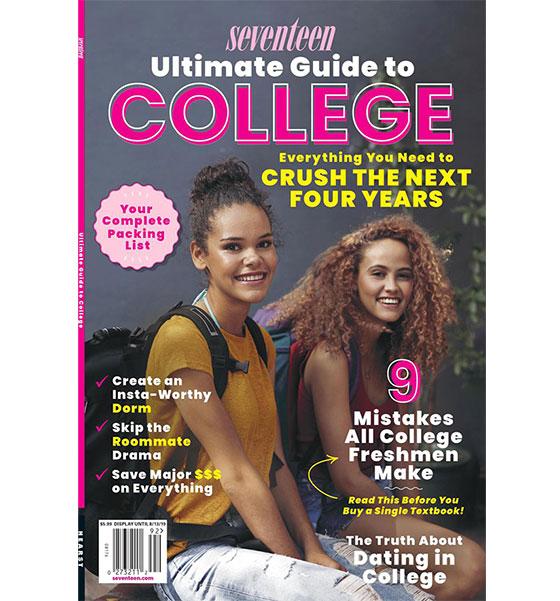 returned to newsstands this week with a special print issue, about six months after Hearst announcedthe nearly 75-year-old title would focus on a digital-first strategy.

At that time, Hearst said it would print four special issues a year.

This year’s first themed issue covers college, in line with the title’s plans to focus on big topics that merit special interest among its target audience. Hearst also saw higher web traffic about college topics during the summer months, as readers geared up for fall enrollment.

The issue offers tips on studying, decorating dorm rooms, dating and meeting new people, but doesn’t have a celebrity on the cover.

Makeup brand Maybelline has a second cover spread, while fashion group Fossil has the back cover of the 92-page issue, which is priced at $5.95, compared with the typical cover price of $3.99.

Before ending its regular print edition, Seventeen had a circulation of about 1.9 million as of June 2018, down more than 100,000 from six months earlier, according to the Alliance for Audited Media. Traffic to its website has held steady at about 2 million.

Hearst is among the publishers that responded to the migration of audiences to digital media by cutting back on print editions, except for a handful of special issues. Condé Nast employs the same strategy with Glamour, as does Meredith Corp. with Cooking Light, in printing special editions that focused on significant milestones or events.

The special issue magazine, priced at $5.95, is more expensive than a regular Seventeen magazine that would have usually cost $3.99. But this magazine is 92 pages long and is a bit more condensed, designed to be easily portable, Berger said. It stays on newsstands through Aug. 13.

As a magazine title aimed at teenage girls, Seventeen has been aware of trends among Generation Z, the demographic group born after 1995, for almost a decade. The group differs from its predecessor millennials in being the first entirely digital generation, while smartphone apps like Snapchat, Instagram and YouTube help them to connect with influencers and each other.

With Gen Z entering adulthood en masse over the next decade, those media consumption habits will have a broader effect on all print titles.