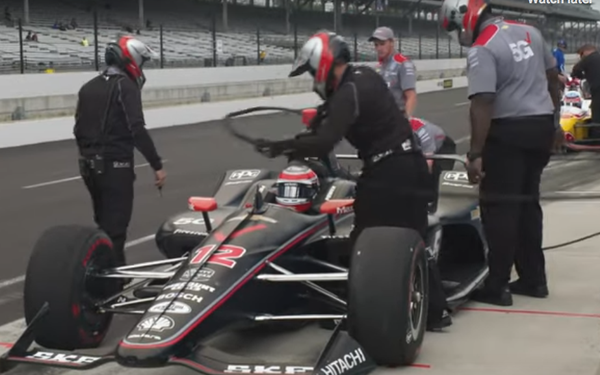 How 5G technology will change the world is a daily topic in the media, and the latest example is this: It may have influenced the outcome of the Indianapolis 500.

Team Penske, the racing organization whose cars have won a record 17 Indy 500 races (including this year), used Verizon’s 5G Ultra Wideband network to analyze cars coming in and out of the crucial first turn during practice runs and time trials.

Frenchman Simon Pagenaud, who won Sunday, was driving one of four Team Penske cars entered in the big race.

By streaming video of that turn over 5G-connected cameras, Team Penske was able to analyze a driver’s performance in near real time, and make changes while the car was still on the track. Previously that kind of video analysis would take hours or days.

Penske engineers were able to take those video transmissions and compare them to drivers’ previous laps with video overlays to see where a driver might have wasted some time. That information could be rapidly relayed to the pit crew to improve the performance the next go-round.

In a race that is sometimes decided by a fraction of seconds, those slight tweaks could add up.

“5G is giving Team Penske unique visibility into driver’s performance coming in and out of turn one, which they are taking at speeds of about 230 miles per hour,” said Alex Smith,  a member of the tech staff at Verizon.

“In addition to providing near real-time video to engineers in the pit and garage, we’re also providing the spotter with near-real-time video feeds from different cameras on the track that they can view on their tablet. Before, spotters had to rely on a pair of binoculars, or delayed video feeds. With 5G, we’re giving them access to information they never had before so they can warn the driver of an accident ahead or who’s coming up behind them.”

The Indianapolis 500 is not the only place where Verizon is touting its 5G capabilities. In March the wireless giant announced a two-year pact with the NFL, making Verizon the league’s “official 5G innovation partner.” That deal seems centered on Verizon and the league working on 5g mobile games with a NFL theme, and greatly expanding the number of camera angles available to to 5G-connected fans.