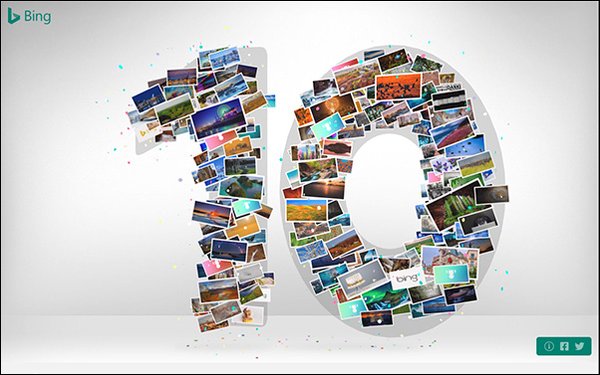 Microsoft kicked off Bing's 10-year anniversary Monday with a little nostalgia and a fair amount of data and trivia.

The first Bing logo debuted in 2009 with rounded letters intended to “emphasize the friendly, approachable nature of the search experience.” It went through several iterations. Bing moved from the bird shape of its 2013 logo to a symbol that looked like an origami shape piece of paper, with the color branded in teal.

It’s doubtful that the colors or the shape of Bing’s logo influenced search, but the search engine has seen 100 consecutive months of growth in market share, and $7 billion in revenue from more than 500,000 advertisers served globally in the past 10 years.

Today the engine supports about 1,800 partners in 20 countries. Since the launch in 2009, Bing has doubled the PC search market share.

It has been a roller coaster ride for Bing during the past ten years. Microsoft branded its advertising group Microsoft Advertising and rolled in Bing Search advertising. The company had good and bad quarters in terms of revenue. At one point, analysts didn’t think the company would make it.

Bing and Google have seen slower growth in the past year. In the March 2019 quarter, total paid-search spending rose 14% year-on-year, down from 16% growth in the prior quarter, according to Merkle. The agency’s first-quarter digital marketing report for 2019 noted the drag Bing and Yahoo had on search spending, yet Google grew more rapidly than the overall average.

Bing’s lack of market share on mobile devices remains the major stumbling block for the search engine, in my opinion.

Phones and tablets combined to produce 74% of retailer Google search-ad clicks in the first quarter of 2019 -- up eight points from a year earlier and the highest rate across the five industries analyzed in Merkle’s latest report.

Product ads, however, drove mobile share of Bing search clicks in the first quarter.  Phones produced 62% of Google search ad clicks, up from 54% a year earlier. Including tablets, mobile devices accounted for over 68% of Google paid clicks.

Bing has seen major gains in mobile during the past year on a smaller scale. These gains were largely due to a jump in mobile. Product Ad clicks, phones and tablets produced 26% of all Bing search ad clicks in the quarter, up from 18% a year earlier.

More than half of Bing Product Ad clicks were on mobile devices in the quarter, according to Merkle.

If you remember from the report, overall click growth for search ads accelerated to 10% YoY, but the cost per click slowed from 7% in in the final quarter of 2018 to 4% in first quarter of 2019, primarily due to the mix shift to mobile where CPCs remain lower than average.

Nonetheless, Microsoft Bing had its day in March when Verizon Media began transitioning all its search advertising to Bing Ads. This affected Google search partner traffic, as Yahoo has been running Google Shopping Ads since 2016.

To celebrate Bing’s anniversary, Microsoft is giving away a change to win a trip woth about $1,900, Microsoft rewards points, downloadable wallpaper packs such as pictures from U.S. national parks, as well as extraordinary photographs of the sun reflecting on the earth, and photos of Africa.

Click through the images in the mosaic found on the #BingIs10 retrospective experience to get a chance to win trips to some of the destinations featured in the photos of the day, from Africa to Costa Rico and beyond. Microsoft also is giving downloadable wallpaper packs such as pictures from U.S. national parks, as well as extraordinary photographs of the sun reflecting on the earth, and photos of Africa.