When Size Matters, But Photographic Evidence Does Not 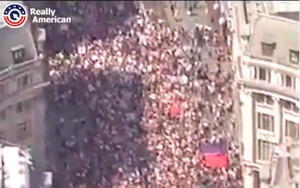 "There were thousands of people cheering," the President of the United States said during a press conference on Tuesday when he was asked by a reporter about the crowds of protesters who took to the streets in London during his trip to the U.K.. "I don't see any protests. I did see a small protest today, very small. So, a lot of it is fake news, I hate to say."

The President's quip defied ample photographic evidence of crowds of Brits protesting his trip, during which he and his family were treated as royalty by the U.K.'s actual royalty.

It reminded many observers about the President's claims that his inauguration crowd size had set new records, even though photographic evidence showed that was far from the case.

It also reminded the world that America's President lies about obviously provable facts, and that when it conflicts with his own personal reality, he simply writes it off as "fake news," something Americans consider one of their nation's greatest problems, according to a new study released today by Pew Research Center.

This is why rallies agains Trump can only be held outside. pic.twitter.com/9NUbbMjcsU