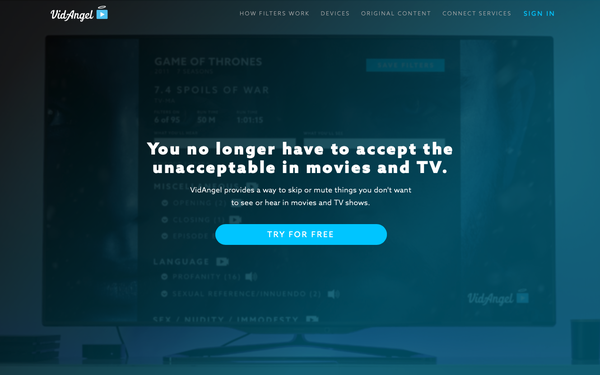 VidAngel CEO Neal Harmon said Monday the company will appeal and explore its options in bankruptcy.

VidAngel's streaming service allowed users to censor nudity or violence from videos. The company purchased DVDs like "The Martian" and "Star Wars: The Force Awakens," and then streamed them from its own servers without obtaining licenses from the studios.

The company said it provided customers with a “filtering tool” that allowed users to edit out objectionable portions of movies.

The Provo, Utah-based tech company “sold” movie streams to consumers for $20, but allowed them to sell back the movies for $19 in credit.

Disney, Warner Bros and 20th Century Fox sued VidAngel in June of 2016, arguing that the startup was infringing copyright by streaming programs without a license.

VidAngel contended its service was protected by the Family Movie Act, a 2005 law intended to enable parents to censor movies by stripping them of material they deem inappropriate for children. The Family Movie Act provides that copyright infringement laws don't apply to technology that mutes or hides "limited portions of audio or video content" from an authorized copy of the movie.

Birotte sided with the studios in 2017, and enjoined VidAngel from operating its streaming-and-filtering service.

The company appealed to the 9th Circuit, which also ruled against VidAngel. That court said VidAngel's interpretation of the Family Movie Act law "would create a giant loophole in copyright law."

In March, Birotte granted the studios' summary judgment on their claim that VidAngel infringed copyright.

The company, which filed for bankruptcy in 2017, currently offers some original content for streaming.