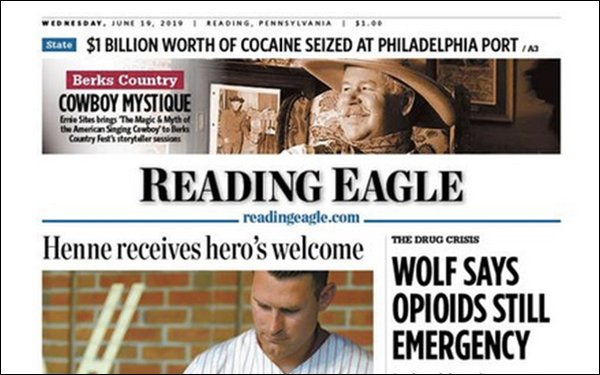 On June 30,  MediaNews Group, also known as Digital First Media, will close its acquisition of the 150-year-old family-owned Reading Eagle Co. As both entities prepare, staff at the Eagle were told in a WARN notice issued by its human-resources executive director that 81 positions will be cut.

A final list of employees affected by the acquisition will be released by June 28.

MediaNews Group, which is controlled by hedge-fund Alden Global Capital and owns around 200 publications, is well-known for its aggressive approach to saving money by slashing staffs and selling off real estate when scooping up newspapers.

The company owns other Pennsylvania properties, including Pottstown’s The Mercury, five weeklies and two niche publications.

The cuts represent more than one-third of the group’s employees, which number 221. The exact titles being cut were redacted by the state of Pennsylvania. As The Morning Call, which reported the story, notes, this makes it difficult to know which departments will be hardest hit.

Employees have had to interview for their jobs, including the paper’s editor Garry Lenton. Lenton will be leaving the paper, he announced on Monday.

The company counts a commercial printing subsidiary, a marketing and promotions company and a weekly among its properties, in addition to the Reading Eagle.

The Reading Eagle filed for Chapter 11 bankruptcy in March. The company’s advertising revenue plummeted from $17 million in 2016 to around $12.6 million in 2018. President-CEO Peter D. Barbey was funding the paper with loans amounting to $250,000 a month, according to court documents.

U.S. Bankruptcy Court agreed to the sale of the paper in May.. MediaNews purchased the company’s assets for $5 million.