'The Washington Post' To Launch Podcast, Opinion Section In Spanish 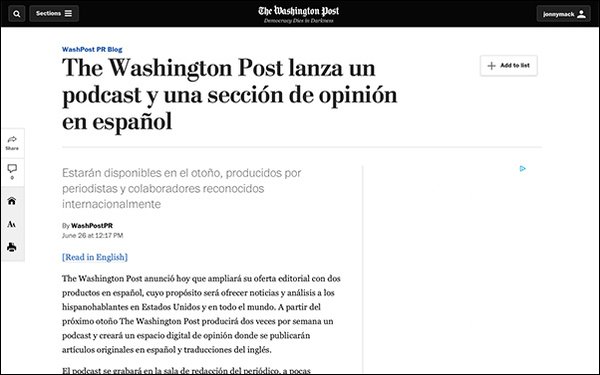 To connect with Spanish-speaking audiences, The Washington Post is launching a podcast and Opinions section in Spanish this fall.

The podcast will focus on big news stories and the “intersection of Washington and the Spanish-speaking world,” according to the publisher.

Dori Toribio, a correspondent for Spain’s Mediaset, and Jorge Espinosa, a radio journalist-podcast director at Colombia’s Caracol Radio, will also be part of the podcast. Other WaPo reporters will join “from time to time,” according to the publisher.

Baron noted the media company has made “a significant investment in audio storytelling” over the past year, and is making an effort to “expand our audio offerings to additional listeners.”

The new hub in the Opinions section will live online and house original columns in Spanish, as well as translations. Commentary and analysis will come from writers in Latin America, Spain and the U.S..

Mexican journalist Mael Vallejo and Peruvian journalist María Jesús Zevallos — who have worked at media organizations like Esquire Latin America and Vice en Español — will serve as editors of the Opinions section, based in Mexico City.

The section is part of The Washington Post’s Global Opinions offering, which gives commentary on news “in every region in the world,” stated Fred Hiatt, editorial page editor at the newspaper.

“This new Opinions section will be a source for Spanish-speakers seeking a range of perspectives on social and political issues throughout the Americas,” he added.