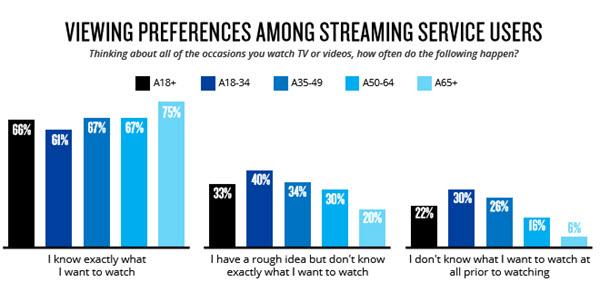 As more and more streaming platforms compete for users’ time, operators are struggling to differentiate their offerings, crack the content discovery code and keep consumers tuned in.

Nielsen’s just-released Q1 2019 Total Audience Report finds that 66% of streaming platform users as a whole know “exactly” what they want to watch when they tune in. The percentages agreeing with that rise with age, peaking at 75% among those 65 and older.

When they’re not sure what they want to watch, 58% say that default to their favorite channels, and 44% scan through channels. Only a third say that they browse their SVOD content menus, and just 24% watch recommendations from a service’s guide or menu.

Nearly a quarter (21%) say that if they can’t decide what to watch, they simply go do something else.

Conclusions: Programmers need to work harder to dislodge ingrained habits, “spur viewing disloyalty a little more,” and improve the accuracy of their recommendations.

The data also confirm that they have a short window to accomplish this.

On average, U.S. adults spend 7.4 minutes browsing when they’re not sure what they want to watch. That rises to 9.4 minutes among those 18 to 34 — reflecting that 30% of this age group go in with no idea what they want to watch, and 40% with only a rough idea. Those 35 to 49 also exceed average browsing time, at 8.4 minutes. But older age groups have less patience, giving up after about five minutes.

On average, U.S. Adults now spend 11 hours and 27 minutes per day consuming media across TV, TV-connected devices, radio, computers, smartphones and tablets — up by a full 21 minutes versus Q1 2018.

Overall video use — time spent with a TV set, video on a computer, or and using video focused app/web on smartphones and tablets — clocked in at five hours and 46 minutes per day.

While that’s an 11-minute decline from the year-ago quarter,  Nielsen points out that Q1 2018 viewership levels were elevated by the Winter Olympics.

Video viewing through TV-connected devices rose by eight minutes per day, on average, driven in part by the ongoing replacement of old TV sets with ones pre-loaded with connected options, says Nielsen.

Seven in 10 homes now have a subscription video on demand (SVOD) service, and 72% use streaming-capable TV devices. Also, as of June, virtual multichannel video programming distributors (vMVPDS) exist in 5.3% of all U.S. TV households.

Video consumption on smartphones and tablets also increased — by five minutes per day, on average.

Adults 18-34 spend more than half of their daily media usage with digital media, such as computers, smartphones, and tablets.

Also, half of all adults stream audio through their smartphones each week, and 28% of U.S. households own a smart speaker.