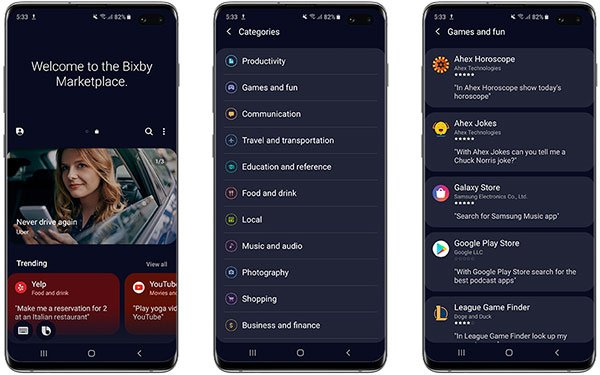 Trying to give Apple Siri and Google Assistant some competition, Samsung just launched Bixby Marketplace — a platform for apps that sync with its virtual assistant.

Officially open for business in the United States and South Korea, the Bixby Marketplace offers Google Maps, Spotify, iHeartRadio, NPR, and Yelp, among other well-established apps.

Rather than “apps,” the South Korean tech titan uses the term “capsules” to describe mobile applications that work with Bixby.

These so-called capsules are organized by categories, such as “productivity,” “business and finance,” “sports” and “shopping.”

To find capsules, consumers can search by name, developer or keyword. Curated picks and user reviews are expected to aid in the discovery process.

Adding a layer of customization, the marketplace will encourage users to identity “preferred capsules” for certain types of voice requests.

For example, if a user tells Bixby to “get me a ride to San Francisco airport,” the assistant will prompt the user to pick a particular ride-share capsules. Then, they will be given the option to set that provider as their preferred ride-share capsule.

Virtual assistants are a big deal. Indeed, about half of all search queries will be conducted with the help of a virtual assistant by the end of next year, according to Comscore.

Arriving late on the scene,  Bixby has barely made a dent in a marketplace dominated by Amazon Alexa, Google Assistant and Apple Siri.

As of April, Apple Siri and Google Assistant were tied with about a 36% share of the market, according to Bing Ads team.

Alexa came in third with a 25% share of the market, while Microsoft Cortana followed with a 19% share.