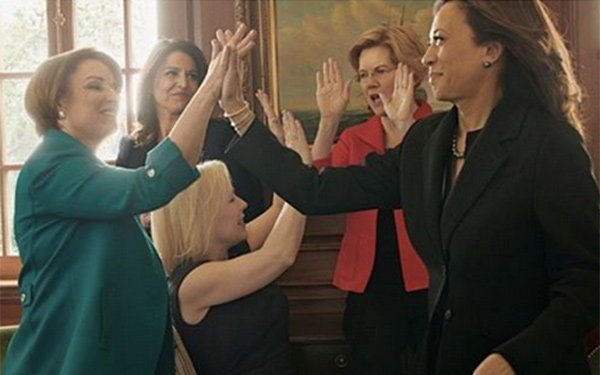 Marianne Williamson, the best-selling spiritual author and activist, one of six women seeking the Democratic nomination for president, criticized Vogue for not including her in an article about the women candidates.

She posted a message to her 420,000 followers on Instagram saying Vogue doesn’t get to decide who should run for president.

“The framers of the Constitution did not make Vogue magazine the gatekeepers of America’s political process, here to determine who and who is not to be considered a serious political candidate,” she said.

Vogue's article has interviews with Sens. Kirsten Gillibrand, Kamala Harris, Amy Klobuchar and Elizabeth Warren and Rep. Tulsi Gabbard. The magazine also released photos of the five women together, including one showing them smiling and high-fiving each other.

In response to Williamson’s criticism, Vogue stated on CNN the magazine is “in no way discrediting Marianne Williamson and all she's accomplished." Vogue wanted to highlight the five female lawmakers “who bring a collective 40 years of political experience to this race," the statement said.

Williamson and Andrew Yang are the only two candidates who haven’t previously served in public office, but they were invited to appear among the Democrats during two televised debates last week.

Because the Democratic field has a record 23 candidates, they split into two groups to make the discussion more manageable. Williamson appeared in the second night of debates, which attracted a record 18.1 million TV viewers across three networks, according to NBC News.

Williamson made the most of her brief appearance with an unconventional performance that was a big hit on social media and led CNN to gush "A Star Is Born." Google Trends said more people searched for her name during the second debate than for any other candidate, including headliners like Vice President Joe Biden, Sen. Bernie Sanders and Pete Buttigieg, mayor of South Bend, Indiana.

Williamson said she first saw the Vogue article online, “like everybody else did." She is mentioned in the article, but said that nobody from the magazine talked to her about the story.

“If we’re going to free this country to be all that it can be, then first we have to free ourselves from the thought firms dictated to us by a corporate/political/media establishment," she wrote in her Instagram post. "It is the people and the people alone who should decide who will be their president, unburdened by the insidious influence of an elite on patrol. Period.”

As a political outsider, Williamson is getting another lesson on what it means to be excluded from the establishment— and almost no publication is more establishment than Vogue.

The magazine isn’t obligated to write about everyone who aspires to be president, although Williamson does have an interesting story to tell. Being excluded from Vogue’s clique of Beltway matrons can work to her advantage, given the popular disdain for Washington insiders.

Every first-term presidential candidate presents themselves as an outsider who can shake things up. The key question going into 2020 is whether Americans are ready for another outsider after four years of President Donald Trump.

Biden currently leads the pack among Democrats, indicating that voters may want to bring back the establishment. But the election is still 16 months away, and a lot can happen to change public opinion.