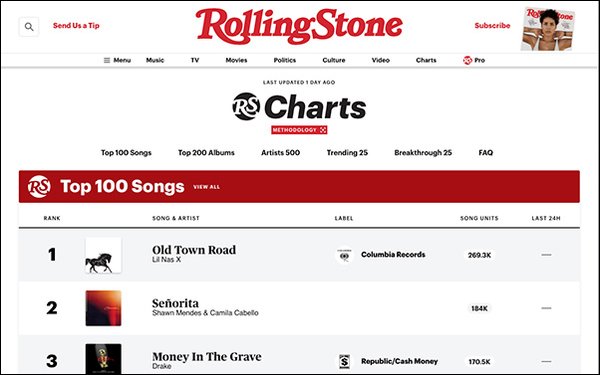 “All five of these charts auto-populate in almost real-time on a daily basis, with finalized overviews available at the end of each week," reads at post on the Rolling Stone site, announcing the debut. "Our aim is to reflect the true impact of music, celebrate the artists most deserving of attention, and better define what it really means to be No. 1.”

The Penske Media brand announced it would launch a series of charts to rival Billboard's music charts — widely considered the industry standard — on May 13, but then announced a delay.

“While we had initially targeted a public beta launch of May 13, we are instead going to remain in private beta to optimize with our industry partners and fully ensure the smoothness of our presentation," a statement read at the time.

All of the charts are powered by Alpha Data, previously known as BuzzAngle.