Why Not A 12-Ounce Can Of Chardonnay? Sen. Schumer Wants Rule Changed 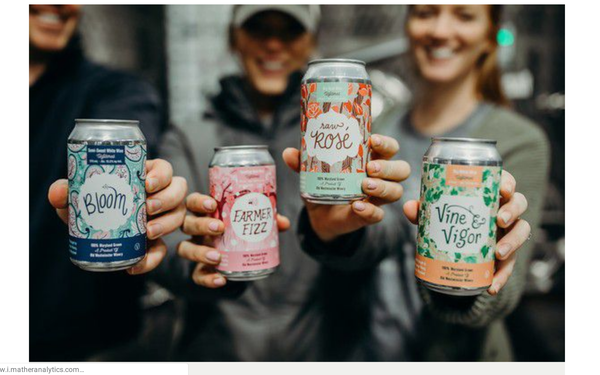 In a nutshell, that’s what Sen. Chuck Schumer (D-NY) is urging the federal Alcohol and Tobacco Tax and Trade Bureau (TTB) to allow. That agency is currently considering changing so-called “standards of fill” rules for wine and cider in cans. It’s inviting public comment on the matter through the end of August.

Right now, buying a 12-ounce can of wine is, weirdly, not possible. Wine can be sold in cans but those containers must be 12.7-ounce cans  (that translates to 375 millileters) or in 8.4-ounce cans (roughly 250 milliliters) in three- or four-packs, but not individually.

The new TTB regulations -- now supported by WineAmerica, the national association of American wineries -- would lift those barriers.

Schumer is getting involved because wine-making is a huge business in upstate New York.

“Even though it has a $4.8 billion impact on New York, TTB is leaving New York’s wine industry hanging on the vine, with outdated rules and restrictions stopping it from reaching its potential,” Schumer said when he toured the Finger Lakes-Rochester area wineries during the Senate’s Independence Day holiday recess, as noted in a news release from the Senator's office.

“As canned wine continues to become more and more popular, there’s just no good reason why wine producers, like Fox Run Vineyards, shouldn’t be able to capitalize and sell their products in the most popular-sized cans, especially when studies have shown that lifting these unnecessary restrictions would lead to even further economic growth," he added.

The odd-sized cans are more expensive, vintners say, mainly because can makers produce so many standard-sized beer and soda containers: 200 billion a year according to TheWorldCounts.com. So getting a can manufacturer to make odd-sized cans to comply with current regulations drives up the price and limits the number of suppliers.

Schumer reported that some wineries have told him they had to wait up to six months to buy cans in bulk, which makes it tough on small producers that dot the Finger Lakes region.

Even so, the sale of canned wine is growing rapidly, as Schumer noted, and major labels, including Gallo, are in the market. Last year, canned wine sales grew to $69 million, according to Nielsen, as noted in a recent Wine Spectator article -- still only 0.4% of the total wine market. Younger drinkers are the best customers for vino in cans.

Among the few smaller winemakers that have now begun offering cans is Old Westminster Winery, a family-run business in Maryland, which introduced them in 2017.

Ashli Johnson, a partner in the business, told The Baltimore Sun at the time, “The advantages of canned wine is that [it’s] lifestyle-friendly… not necessarily better than a cork and a bottle and stemware, but it’s situational.”