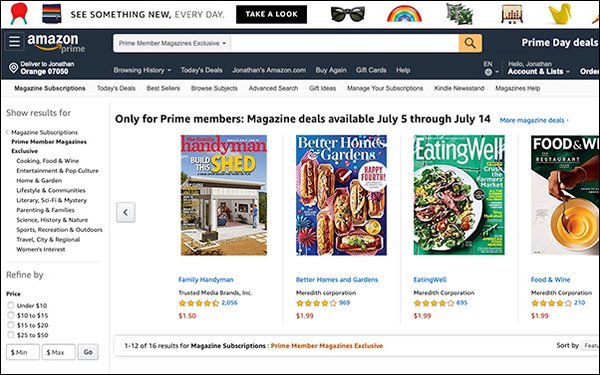 Amazon is gearing up for its annual Prime Day shopping event with zillions of announced markdowns, including 85% discounts on print magazine subscriptions.

ON July 9, the ecommerce giant added the deals to its Amazon Newsstand, with titles selling for as little as $1.50 for a six-month subscription. Parents, Taste of Home, Sunset, Country Woman and Farm & Ranch Living are all available for that price.

Meredith Corp.’s Better Homes & Gardens, EatingWell, Food & Wine and Martha Stewart Living are being offered for $1.99 for six months, while $35.72 will get bring 26 weeks of People magazine to a subscriber’s mailbox.

Conde Nast’s Bon Appetit, Wired, The New Yorker and Conde Nast Traveler were listed for $5, while Hearst’s Woman’s Day,Food Network Magazine and HGTV Magazine ranged in price from $2.99 to $10.99.

Amazon is offering the magazine deals until July 14 in the lead-up to Prime Day. For the first time, it will be extended this year to a 48-hour period on July 15-16.

The company started Prime Day in 2015 to boost subscriptions to its Prime service, which offers expedited shipping on most products and ad-free streaming of music and video.

The day has morphed into Amazon’s biggest sales event of the year, with the company saying more than 100 million products were sold on Prime Day 2018.