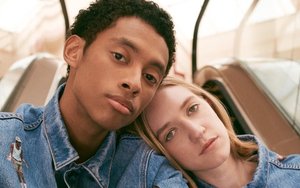 Amid growing strength in all its divisions, Levi Strauss & Co. posted higher-than-expected revenues. And on the heels of its recent success at Coachella, it is stepping up marketing in digital and social marketing channels.

For the second quarter, the San Francisco-based company says revenues rose 5% to $1.31 billion, from $1.25 billion in the same period a year ago, a gain of 9% on a constant-currency basis.

But net income plunged 63% to $29 million, from $77 million, which the company chalked up to costs related to its recent public offering, as well as a calendar shift in ad spending.

While that news disappointed investors, the company says it now expects its sales for the year to better than earlier estimates, with revenues rising in the high end of mid-single digits.

Levi’s says its direct-to-consumer business, which includes both its growing store network and ecommerce, gained  9%, with ecommerce growing 14%.

“We again dominated Coachella as the go-to uniform for festival season with Levi's 501 cutoff shorts, which were up more than 50% this quarter, taking center stage,” said Chip Bergh, president and CEO, in a conference call to discuss the results.

While the company remains committed to TV advertising, it is also doubling down on digital. “The very best marketing, going all the way back to the beginning of time, is word-of-mouth, and today that is Instagram and Snapchat,” said Bergh. “That’s how consumers are learning about things, and shoppable social media is coming really, really fast. We’ve got to be all over that. That’s how to connect with young consumers.”

He cited positive reaction to Levi's new “Stranger Things” collaboration as examples of how important it is to link the brand to pop-culture events.

And he said the company will introduce a Levi’s app soon, and continues to be very excited about previously announced efforts to personalize apparel.

Observers are keeping a close eye on Levi’s plans. “Overall, we believe the company has established a solid foundation for future profitable growth given Levi’s leading market position that should continue to capture share through marketing investments,” writes Dana Telsey, who follows the company for the Telsey Advisory Group, which currently expects Levi Strauss to outperform the market. Over the next three years, she predicts outsize growth in D2C, particularly ecommerce, as well as increasing share in both China and India.