Fight To The Fin: NatGeo 'Sharkfest' Vs. Discovery 'Shark Week' 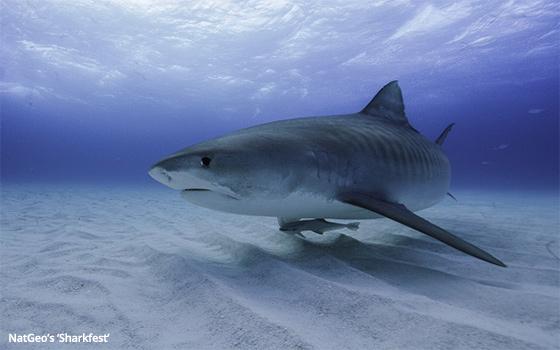 National Geographic evidently senses blood in the water in its decision to expand its annual “Sharkfest” summer series of shark shows to three weeks.

That would make “Sharkfest” two weeks longer than Discovery Channel’s “Shark Week,” the annual shark celebration that has been a staple of summer TV since it first reared its backfin in July 1988. Sharkfest is a relative newcomer, having swum into these shark-infested waters for the first time only seven summers ago.

Clearly, when it comes to sharks, NatGeo and Discovery Channel are not chums.

Sharkfest was once a one-week event. Then it grew to two weeks last summer, and now it has grown to three.

Just one of the three weeks will be showcased on National Geographic Channel, however -- the week of this coming Sunday (July 14) through the following Sunday (July 21). After that, the two-week tail end of Sharkfest will be seen on NatGeo's other channel, NatGeo Wild, through Friday, August 2.

The two NatGeo channels intersect, you might say, on that Sunday evening, July 21, when they will simulcast a one-hour documentary called “World’s Biggest Great White?,” which appears to be positioned as the centerpiece of this year’s Sharkfest.

This show promises to reveal to the world the largest great white shark ever filmed -- a beast 20 feet long and weighing in at 2.5 tons.

Meanwhile, Discovery’s Shark Week runs from Sunday, July 28, through Sunday, August 4, coinciding with the third week of Sharkfest. Shark Week kicks off with a monster shark of its own -- the title specimen featured in “Expedition Unknown: Megalodon.”

Unfortunately, viewers should not expect to see any footage of this mega-monster swimming around because it is a prehistoric creature that has long been extinct. Megalodon does get revived from time to time on Discovery, and despite the species' extinction, it has emerged over the years as a standout star of Shark Week.

Shark shows have become a staple of summer TV most likely because the hot weather months coincide with beach season. It all goes back to the movie “Jaws,” released in 1975 -- in which a quaint New England beach town was terrorized in midsummer by a great white shark.

Sharks in both movies and on TV have been hugely popular ever since.