Diversity Among The Planets Is One Theme Of CW's 'Pandora' 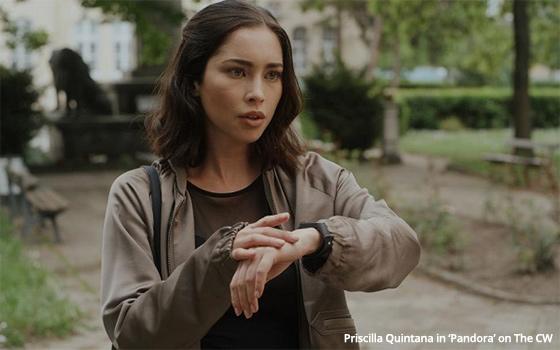 The battle for sustainable tolerance and diversity on the planet Earth is not enough for the earnest young people in “Pandora,” a new space-aged sci-fi series premiering this week on The CW.

For them, promoting diversity throughout the entire galaxy (if not the universe) is the goal. And they have their very own college campus on which to hash out the details of their quest for interplanetary tolerance.

The year is 2199, and the campus is Earth’s Space Training Academy. Pandora is the name of a new student from outer space who is newly orphaned following an attack on a research facility on her home planet in which her parents were killed. She is played by Priscilla Quintana (pictured above).

The student body is itself diverse -- not only ethnically and racially but intergalactically. But even on this college campus of the future, the presence of some aliens presents a challenge to the tolerating abilities of some of the Earthling students.

At least one of them expresses a profound distrust of one such visiting student from another planet. Her remarks, in which she reveals her disdain of this Spock-like alien college student who is overtly “different” than the other students, is supposed to play as a symbol of society's ingrained and intractable intolerance toward those who are not like the rest of us.

But then, later on in the premiere episode of “Pandora,” her distrust turns out to be well-founded. What are we supposed to do with that surprise plot turn?

The main storyline of “Pandora” concerns itself with another quest -- Pandora's search for answers to explain why her parents were killed, and by whom. In this effort, she encounters various roadblocks in the form of an uncle who is also a professor at the Space Academy.

Late in the episode, the point is made that once Pandora opens a “box” of some sort, the evil she lets loose will be difficult, if not impossible, to contain. What these evils might be are not specified in the series premiere

Clearly, there is a lot at stake in this show, and a lot to place on the slender little shoulders of plucky Pandora.

She appears up to the task, even if the show itself plays like a B-movie of old. The TV Blog realizes that plausibility in a show such as this should not be expected. But at the same time, the average viewer of this type of TV show can assume that the interplanetary travel it depicts would at least require the use of spacesuits.

In this show, no one dons any protective garb of any kind before zooming off among the planets in futuristic space jets, and then strolling blithely upon the rocky surface of some distant world.

Oh, well. It could be that the CW's audience, particularly in the summer, are not searching for sci-fi that is taxing on the intellect. If that is the case, then their show is here.