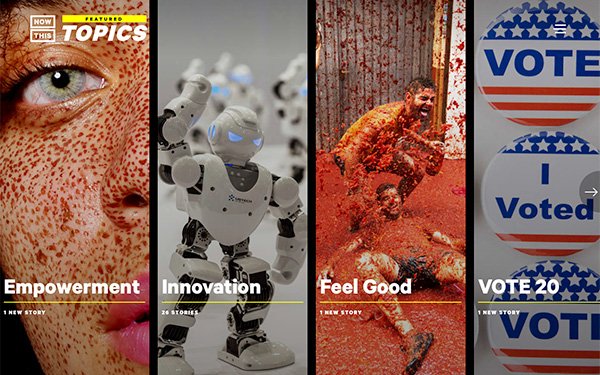 is launching a newsletter called KnowThis,slated to land in subscribers inboxes five nights a week.

The site approached the idea of a daily newsletter based on the success of its popular Facebook show of the same name. It summarizes the day’s top news stories in short segments appropriate for mobile viewing.

Athan Stephanopoulos, Now This president, stated: “We’re excited about the opportunity to bring the day’s top news, including exclusive interviews with presidential candidates and deeper coverage of key issues important to young people, directly to our audience’s inboxes in a new format."

KnowThis is another extension of the NowThis name as it continues to expand beyond its signature short video. Recently, NowThis has produced pieces that feature in-depth original reporting in both mid- and long- form formats across Twitter, Facebook, Instagram, YouTube and Snapchat.

The launch of KnowThis comes as many digital brands have focused on the value of daily news products to engage audiences.

Earlier this year, The New York Times revealed its popular podcast “The Daily” reaches 2 million listeners per day and is expanding its staff, in addition to launching Alexa and Google Home skills.

TheSkimm recently launched a daily podcast called “Skimm This,” which delivers snapshots of four news stories each day. The podcast launched simultaneously with a flash briefing version available on Alexa and Google Home.

Likewise, The Atlantic launched a smart-speaker skill called the “Daily Idea,” which delivers a story taken from the site's most compelling reporting, every weekday.

This spring Outside debuted a new smart speaker skill called “Outside Unpacked” that delivers daily roundups of the most important breaking news centered around climate change, outdoor sports, public lands and more. The skill is an expansion of Outside’s newsletter “What You Missed.”
online publishing, web sites
Next story loading