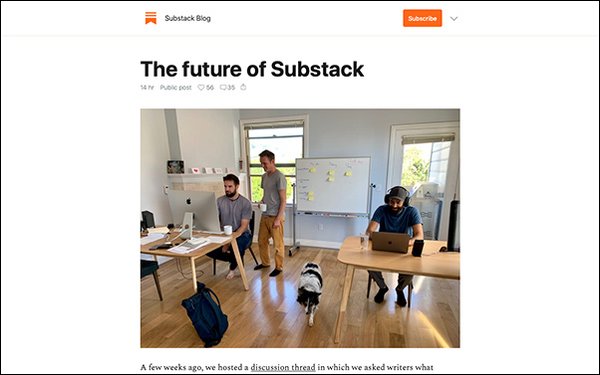 Substack just raised about $15 million to grow its newsletter subscription business. More significant than the sum is the chief investor in the Series A round of funding: Andreesen Horowitz.

Founded two years ago, the startup is based on the idea that readers should be able to invest in quality writers.

“We give writers the tools to publish to email and the web and build an audience they own,” the company’s founder said on Tuesday. “It’s free, and writers can add paid subscriptions whenever they want.”

The company believes subscriptions are powerful because they let people decide what they want to receive, and the economics are such that audience numbers don’t have to be huge to be meaningful.

“If you can convince a thousand people to pay you $10 a month, you have enough to make a living,” according to Substack’s founders. “Even if your work resonates with only a small audience, you can still unlock tremendous value.”

Rather than putting up a pay wall, Substack encourages writers to publish free posts whenever they feel the urge.

“The free stuff affords you the opportunity to reach a wide audience, attracting readers to your voice, worldview and quality of thought,” they argue. "The subscriber-only content allows you to make money from the people who are deeply committed to you.”

Per this latest investment, Andreessen Horowitz’s Andrew Chen is joining Substack’s board of directors.