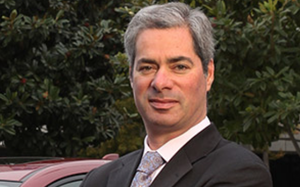 Russell Wager is taking on the role as top U.S. marketer of Kia Motors America.

Wager confirmed the move to the automaker Wednesday, but offered no detail on his position, other than saying he starts Thursday. Well-placed sources say he will come in as director of marketing, with the opportunity to move to vice president of marketing, the title held by his predecessor Saad Chehab.

Chehab, who had held the position since April 2017, stepped down at the end of June in order to accept a job closer to his children.

Kia is outpacing the industry with sales for the first six months of the year up 3.8% over the same period last year.

Wager left Mazda North American Operations in September after six years at the automaker as vice president of marketing shortly after the arrival of Dino Bernacchi, who is Mazda’a CMO.

He developed strategies for a $400 million marketing budget and restructured a 200-person integrated agency’s capabilities to focus on shifting consumer demands (with a digital, social, and local agency marketing focus). He initiated the company's first Hispanic marketing effort in five years, resulting in a 32% sales increase in the first six months in targeted markets.

automotive, personnel
1 comment about "Kia Gets New Marketing Chief".
Check to receive email when comments are posted.
Next story loading