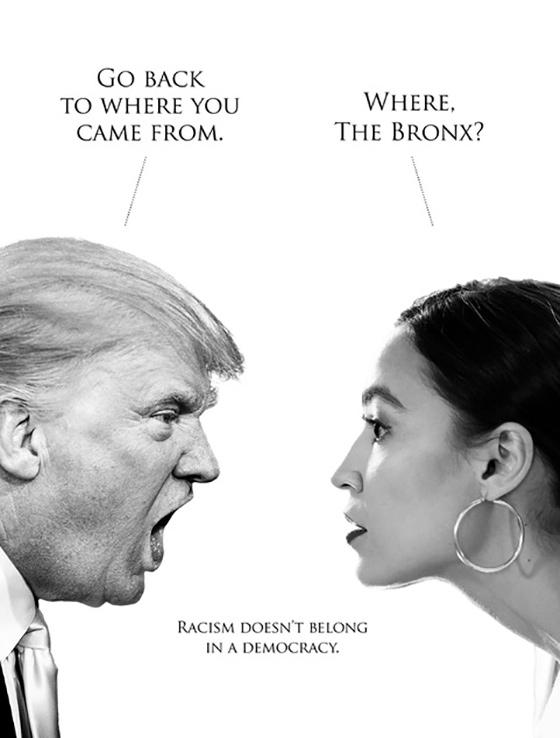 They say a picture is worth a thousand words. The poster you see here speaks volumes about the latest racist rant by the Orange-Haired Wonder.

It’s from the folks at Toronto-based agency Public Inc., who also have an office in New York. They decided Trump’s racist remarks needed to be addressed. There’s no client involved. The shop just feels there’s no room for racism in democracy -- or the world for that matter.

As the agency notes in a Twitter post accompanying this poster, “Share this post to stand up and speak out against hate and negativity. We all have a role to play in creating change.”

The idea for the poster was sparked by a previous campaign the agency was enlisted to do three years ago, when Canada agreed to accept 25,000 Syrian refugees.

Then, the city of Toronto sought Public’s help in combating Islamophobia. Toronto wanted to spark a positive dialogue, challenging the inherent bias many people may have about Muslims.

“So we used the expression ‘go back to where you came from’ to challenge our perceptions and views,” says Phillip Haid, co-founder-CEO of Public Inc. That effort “blew up” on social media, he notes. “We hope this ‘redo’ will also be successful, which is why we made the campaign open source. Anyone can use it so long as they don’t manipulate it for negative intent.”

As of this writing, the agency was still trying to get approval to put the campaign on Facebook. Which speaks volumes about political realities in this country.