A Very 'Brady' Anniversary: Memories Of An Astroturf Backyard 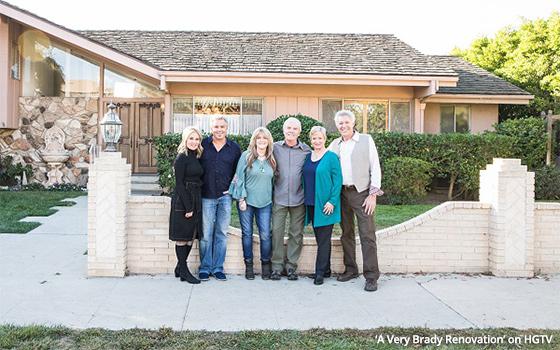 Prime time began at 7:30 p.m. and this TV family had a backyard made of Astroturf. Welcome to the TV experience in America, 1969.

Question for those who are reading this who are old enough to know what I am talking about: Can you believe it's been 50 years since the premiere of “The Brady Bunch”? The show premiered on ABC on Sept. 26, 1969.

It does seem incredible, but it is a symptom of aging. Live long enough and the cultural touchstones of half a century ago are still vividly remembered -- even, apparently, the experience of watching “The Brady Bunch.”

It was a show about a blended family of six children spanning the ages of 8 to 13. Perhaps this age group represented some sort of Baby Boomer sweet spot that made it possible for a generation of boys and girls -- many growing up in similar suburban circumstances -- to identify so closely with the Brady kids.

There they are in the photo above, posing together recently in front of the house still standing in North Hollywood that was used as the exterior of the Brady house on the show.

The photo is from a new series coming to HGTV in September to commemorate the 50th anniversary of the “Brady Bunch” premiere: “A Very Brady Renovation.”

In the series, the six grown Brady kids will collaborate with the renovation stars of HGTV to transform the interior of their classic suburban home -- yes, the very home pictured above -- into its “Brady” era, early-1970s splendor. HGTV owner Discovery Networks says there will be other “Brady” anniversary-themed content on other networks owned by the company as well.

This should go without saying, but the interior of the home pictured above was not used on the show. Those interiors were sets. The “Brady Bunch” cast never, in fact, visited the house during the run of the show, since they were not needed to film any scenes there.

In the years 1969 until 1974 (the show had its last episode in March of that year), the Brady kids looked just like us. And today, they still do. Their TV parents are gone -- dad Mike (Robert Reed), mom Carol (Florence Henderson) and housekeeper Alice (Ann B. Davis).

And yet, here are their grown children -- who were not really their children, and not really siblings, either. Nevertheless, we still think of them that way on the basis of TV nights so long ago.

The show's first time period was 8 p.m. Eastern, Friday nights on ABC, following “Let's Make A Deal,” which led off the evening's prime-time schedule at 7:30.

The following season, “The Brady Bunch,” which became a hit in its first season, moved to the 7:30 Friday slot to serve as a lead-in to “The Nanny and the Professor” at 8. At 8:30 came another new series, “The Partridge Family.”

In fall 1971, “The Brady Bunch” and “The Partridge Family” aired in tandem -- at 8 and 8:30 p.m., respectively, on Friday nights -- positions they would retain for the next two seasons. Watching the two shows consecutively in prime time in those years forms a very strong memory in the TV histories of a generation of children.

So does that Astroturf backyard seen behind the Brady house on the show. Seeing this as a boy, I wondered if all houses in California had fake lawns. There has been no word on whether the backyard of the real Brady house will get an Astroturf makeover this fall on HGTV.