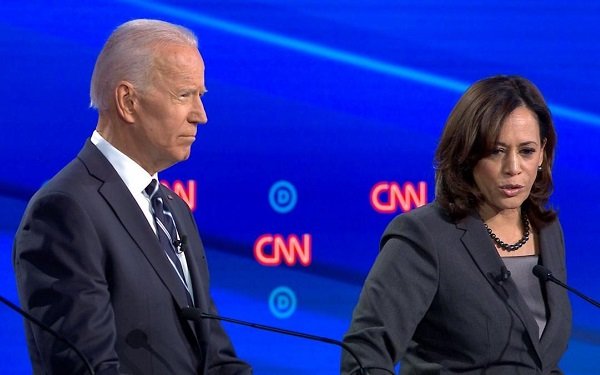 Verbal attacks and insults do not look good on television. As a result, the 10 Democrats on display Wednesday night in the second debate this week on CNN looked contentious, angry and anything but unified.

In their apparent effort to gang up on the veteran in their midst, frontrunner Joe Biden, 76, some of the debaters looked like bullies.

The attack strategies they adopted stood in stark contrast to the debate a day earlier, in which the debaters refrained from aggressive personal attacks even when they disagreed.

That group took the high road, which gave the impression that, although they held differences of opinion, they liked and respected each other anyway. It was a better debate -- easier on the eyes and ears, and more informative, too.

In comparison, aspects of Wednesday night’s debate were downright ugly as various candidates took aim at Biden in an apparent effort to unseat him as the frontrunner for the Democratic nomination next year.

Predictably, California Sen. Kamala Harris again attacked Biden’s record on civil rights and race, accusing him of sympathizing with Southern segregationists early in his Senate career. It was the same attack she launched in the first debate in June.

Harris made headlines then for her attacks. This time around, several of the other debaters seemed inspired by her to take up the same strategy.

These included New York Sen. Kirsten Gillibrand, who accused Biden of stating years ago that women belonged in the home and not in the workplace. New York City Mayor Bill de Blasio also hammered Biden, demanding that Biden answer his questions on a range of issues.

Former HUD Secretary Julian Castro accused Biden of being out of touch. “It looks like one of us has learned the lessons of the past and one of us hasn’t,” Castro said to the former Vice President.

Even New Jersey Sen. Cory Booker, the evening’s happy warrior, got into the Biden-attacking act when the two sparred on the subject of criminal-justice reform. “There’s a saying in my community, that you’re dipping into the Kool-Aid, and you don’t even know the flavor!” said Booker, accusing Biden of being inaccurate in characterizing Booker’s own record on crime.

At least Booker was smiling when he made his attacks. The evening’s other Biden-attackers -- Harris, Gillibrand, de Blasio and Castro -- did it with sneers, frowns and pointed fingers. Their tactics made them seem bitter, angry and unlikable.

A viewer watching at home could even form the impression that Sen. Harris can dish it out, but she can’t take it. Harris seemed stunned when other debaters had the nerve to attack her, such as Hawaii Rep. Tulsi Gabbard, who pointedly questioned Harris’ record as attorney general of California. It was an attack Harris never saw coming, and she was visibly shocked.

Naturally, almost all of the debaters on stage Wednesday night at the Fox Theatre in Detroit attacked President Trump. And they were all united in their party’s goal of unseating him in 2020.

But when they accuse Trump of undermining civility when he resorts to immature name-calling, the accusations ring hollow when they do the very same thing. Gillibrand did it when she vowed to “Clorox the Oval Office” on her first day of President -- a day she will likely never experience.

And Harris described Trump more than once as a straight-up predator not unlike the sex abusers she prosecuted in her career as California attorney general.

Who were Wednesday’s winners? Cory Booker managed to score on the likability scale, simply by smiling instead of frowning. And Biden managed to defend himself capably from the many attacks that came his way. But at the same time, he came across as tired, flummoxed and inarticulate. Nevertheless, he will be back to fight another day.

Of all the debaters, the sanest seemed to be Washington Gov. Jay Inslee. He employed none of the angry, insulting tactics of his fellow debaters. He seemed like a great guy.

In the final-remarks round at the conclusion of the debate, outlier Andrew Yang -- the tech entrepreneur who wants to give every American $1,000 a month -- accused his fellow candidates of all performing in a reality show. “We’re up here with make-up on our faces and our rehearsed attack lines, playing roles in this reality TV show,” Yang said. “It’s one reason why we elected a reality TV star as our president.”