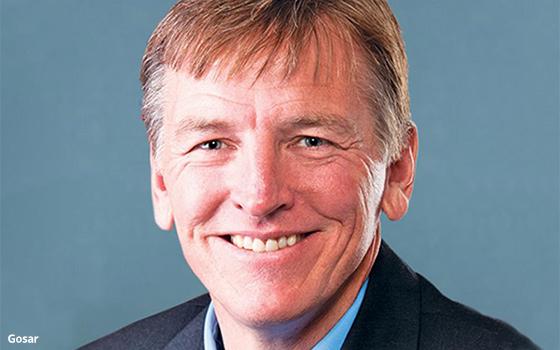 Taking aim at supposed “censorship” by tech companies, a Republican lawmaker has introduced a bill that would curtail web companies' immunity from liability for posts by users.

Rep. Paul Gosar (R-Arizona)'s proposed “Stop The Censorship Act” would strip online platforms of the protections of Section 230 of the Communications Decency Act if they remove lawful posts by users.

“Big Tech’s immunity should strictly be for good faith efforts to remove actual unlawful content,” Gosar says in a post about his bill, introduced last week.

Section 230, considered the most important law regarding the internet, immunizes tech platforms from liability for users' speech. The law protects Yelp from defamation lawsuits based on users' reviews and protects Craigslist from negligence lawsuits based on products sold by users.

Without Section 230, web companies like Facebook, Google, Craigslist, LinkedIn and Yelp would no longer be able to allow users to post anything that hadn't been vetted.

Not only does the current law protect tech companies from liability, it also specifically allows them to moderate content without risking that protection. This ability lets Twitter, Google, YouTube and other companies take down posts that are perfectly lawful, but may nonetheless violate the companies' terms of service by being “offensive,” or for other reasons.

Gosar, like some other Republicans, contends tech companies are basing decisions about content based on viewpoint and discriminating against right-wing opinions.

But not everyone agrees.

“Lots of content gets filtered out, but no more so from the right than from the left," Waldman told Congress last year.

"When victims of racist, homophobic and sexist tweets and comments post those comments to call out the aggressors, it is often the victims that are suspended or banned," he stated. "Activists associates with the Black Lives Matter movement have reported just as many if not more take downs of images discussing racism and police brutality than any of the anecdotal evidence of suspensions or take downs on the right."

Gosar's proposal joins a proposed bill introduced last month by Rep. Josh Hawley (R-Missouri), a frequent critic of Silicon Valley. Hawley's bill would strip large online platforms of the protections of Section 230, unless the companies prove to the Federal Trade Commission that they don't discriminate based on politics or viewpoint.