Coors Light Goes For Younger Drinker In 'Made To Chill' Campaign 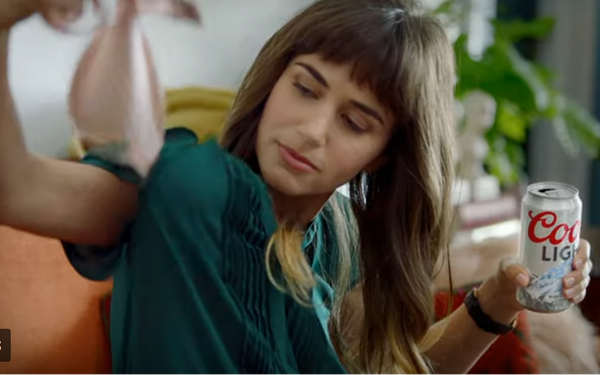 Coors Light just debuted its “Made to Chill” campaign — significant because, for a change, the beer brand that made Colorado famous isn’t dwelling on its Rocky Mountain highs, and is aiming straight at millennials and legal-age Gen-Z drinkers.

It’s also the first campaign from its new ad agency, Leo Burnett in Chicago (where MillerCoors is also based)  and a big move by Michelle St. Jacques, the new  MillerCoors CMO who joined earlier this year, moving from Kraft Heinz. She’s the brand’s first female in that role.

Like many established beer brands, Coors Light has been slumping. Young drinkers are also just flat-out drinking less, industry experts say. So the Coors Light campaign has its work cut out for it,  going after a hard-to-reach bunch of imbibers.

According to IRI research,  Bud Light and Coors Light — the two biggest beer brands in the U.S. — are continuing to decline in popularity. At this point in the year, Bud Light sales are down 5.7% and Coors Light is down 2.5%.

The new Coors Light tagline is “Made to Chill” along with other references to “chill,” meaning “to relax” as the word is popularly used with more youthful consumers. It’s also Coors’ way of making a less straight-on reference to Coors’ long-time brags that it’s “cold lagered, cold filtered and cold packaged.” You know, chilled.

"Cold has always been part of our brand DNA.  And Coors Light's mountain-cold refreshment is the perfect antidote to a world that won't stop being ‘on’ " said Ryan Reis, vice president of marketing, Coors Family of Brands, in a statement.  "But in a world where millennial and Gen-Z drinkers have more and more choices, we have one job to do: give them a new reason to reach for Coors Light."

Expect Coors ads that endorse unusual places to chill, like billboards and commercials  that suggest a “shower beer” is just the place.

Another spot depicts a work-weary young woman arriving home, plucking a Coors Light from the fridge, plopping down on the couch and popping the can open as she deftly removes her bra from under her blouse. Chilling commences! The ad ends proclaiming Coors Light is “The Official Beer of Being Done Wearing A Bra.”

Coors says its new campaign will reach 90% of 21- to 34-year-olds an average of nine times in August. Coors Light ads will show up on Hulu, YouTube, on Discovery’s Shark Week and ESPN and weirder, apparently younger-skewing places like Will Ferrell’s “Ron Burgundy” podcast.