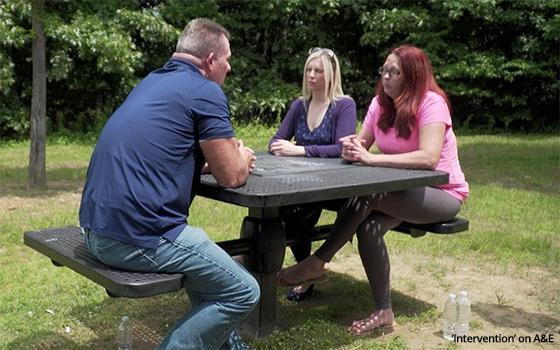 TV’s most remarkable documentary series returns this week to report on the opioid epidemic from a community the show describes as Ground Zero of this lethal national scourge.

The show is “Intervention,” the hard-hitting reality series about drug addicts and their families that first arrived on A&E in 2005. It returns Tuesday night with the first of a six-part series of one-hour episodes focusing on Philadelphia and its environs.

As always, the show is challenging to watch. On “Intervention,” the camera never blinks. Instead, it stares -- never turning away from the bleak lives it chronicles.

Warning: If the sight of needles penetrating skin is something you find difficult to watch, then proceed with caution when watching this week’s “Intervention” season premiere. The TV Blog lost count of this one-hour episode’s many needle insertion scenes.

The show starts with a sobering statistic splashed on-screen: 70,000 Americans die from overdoses each year from opioids ranging from prescription painkillers to heroin. The show then displays this claim: “The highest death rate in the country, per capita, is in the city of Philadelphia.”

This came as news to me as I watched a preview of the episode provided by A&E. As a native Philadelphian, it was personally upsetting.

After flashing this data on-screen, the show’s cameras then proceeded on a journey around the city and its suburbs that takes viewers to two principal communities -- the inner-city neighborhood of Kensington and the suburban township of Upper Darby. Both communities have been affected by the rise of opioid addiction and abuse.

In Kensington, a working-class neighborhood of Philadelphia row homes where my own grandfather grew up, seemingly hundreds of hopeless drug addicts are seen on the show roaming the streets and sidewalks like zombies in “The Walking Dead.” The show characterizes Kensington as the Eastern seaboard’s heroin hub.

Upper Darby is one of the townships on Philadelphia’s western border. It is next to the township in which I grew up. Upper Darby’s most famous native is Tina Fey. This densely populated community of an estimated 100,000 residents has seen a spike in overdose deaths in recent years.

According to the show, when Philadelphia police occasionally roust and evict the encampments of heroin addicts that establish and then re-establish themselves in Kensington, much of this population of addicts migrates to Upper Darby.

This short, six-episode season of “Intervention” seeks to shine a light on this particular corner of the national opioid crisis. The show persuasively positions the drug problem in Philadelphia and its suburbs as symbolic of a problem that is impacting hundreds of communities across the U.S.

On “Intervention,” the focus here is on the overall problem, and also on the lives of real addicts and their loved ones who have allowed the show’s cameras to record their lives.

We see no actual interventions in the “Intervention” season premiere, but clearly the show is setting the stage for these gatherings of family members who, assisted by a professional facilitator, wish only to save the life of the addicted loved one in their midst.

The new season of “Intervention” starts Tuesday night (Aug. 6) at 9 Eastern on A&E.