New Milwaukee Hotel Has Cool Art, Arty Performers All Around 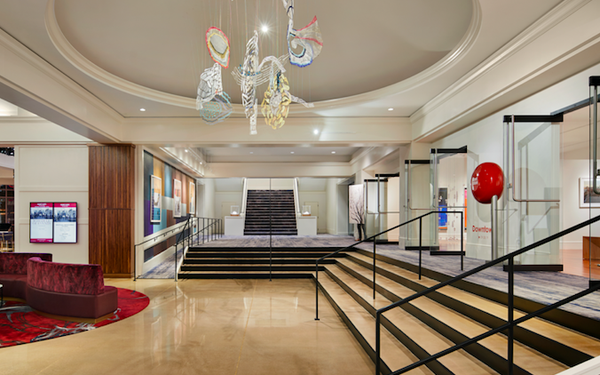 Unlike a lot of hotels, the owners of the new Saint Kate in Milwaukee really think it’s important you appreciate the art  on its walls.

The hotel has set itself up as a space to exhibit original art, located all over the facility. That’s part of a mini-trend in the hotel business.
.
Saint Kate features the performing arts, too. It’s put in performance spaces for scheduled shows but also for theater groups, musicians and other fine arts organizations to use for rehearsals-- as long as the guests can watch them go through their paces.

“Anybody can be an art hotel,” says Erin Levzow. “But this is the first arts hotel.”

Levzow, is vice president of marketing ecommerce for Saint Kate’s owners, Marcus Hotels and Resorts.  She says the hotel staff “auditioned” for their jobs on a hotel stage, where, in addition to being quizzed about  the position they were applying for, they were asked if they had any arty talents.

Thus, when the Saint Kate concierge isn’t concierging, he may pull out his violin and serenade guests in the lobby.

Saint Kate even has a performance art acting troupe that fills the role as the hotel’s “artist-in-residence.”  They and a rotating bunch of other performers pop up in the hotel’s bar and restaurants.

Long before it opened, the hotel “invited in all the 501c3 arts and theater groups in town” to tell them what they needed, Levzow says, referring to the tax designation for nonprofit groups.

The lobby is filled with contemporary works that include well-known artists like Damian Hirst and Deborah Butterfield. Much of the hotel’s artwork has a Wisconsin connection, including works from the Museum of Wisconsin Art.

Other “art hotels” have started up nationwide. Most notable among them is  a new chain, 21c Museum Hotel, described as “a multi-venue contemporary art museum, coupled with a boutique hotel and chef-driven restaurant.”  It currently operates in Louisville, Kentucky; Oklahoma City, Nashville, Cincinnati, and four other cities, with three (including Chicago) to come.

Americans are increasingly taking vacations to destinations closer to where they live, so the idea of spending time in Milwaukee as a “destination” isn’t odd. Wisconsin tourism took in almost $22 billion in 2018, according to state officials, 5% more than the year before.

Attracting those arts-oriented regional guests is one marketing strategy for the Saint Kate. Levzow says says during Milwaukee’s often brutal winters, guests might warm to the idea of a hotel that is entertaining enough to keep them inside. (If not, the hotel is in the middle of an entertainment district.)

“At Saint Kate, we are curating an experience designed to stir one’s imagination, invite exploration and challenge thinking,” said Gregory Marcus, president and CEO of the Marcus Corp., in a statement.

His wife, Linda Marcus, a multidisciplinary artist whose handbags and other clothing landed her some time on “Project Runway,” helped pull together the hotel’s art, along with several other pros, most notably Russell Bowman, former director of the Milwaukee Art Museum.

All the rooms feature a butcher block desk, a roll of butcher paper and crayons for guests to use for their own spontaneous art projects. There are also 10 over-the-top bedrooms among the hotel’s 214 guest rooms; one is decorated entirely in colorful leopard spots.

Since Saint Kate opened in June, Levzow says, its average daily occupancy rate has been far above average -- and for a hotel not associated with a chain, would-be visitors seem to have no trouble discovering it. Some flattering news coverage has helped. Rooms run about $250 a night, though there are more expensive rooms, too.