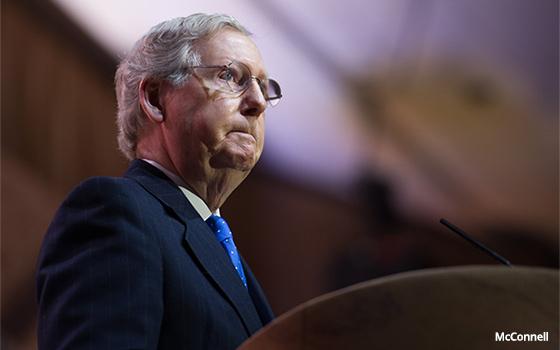 In the past 48 hours, the Republican National Committee, campaign arms of the House and Senate GOP, the Senate Leadership Fund, and Donald Trump’s re-election campaign have all committed to a Twitter boycott.

Depending on the length of the boycott, Twitter could potentially lose millions.

The controversy began after Twitter locked McConnell’s campaign account for posting a video of protesters gathered outside of the Senator’s home. The video violated Twitter’s violent threats policy, the company said earlier this week.

Twitter declined to address the Republicans' ad boycott on Thursday.

“We firmly believe that if a platform allows #massacremitch to trend but locks our account because we posted threats made against him, there is something deeply wrong with that platform,” Golden said in a statement.

Led by President Trump, Republican critics have grown more vocal about what they see as an unfriendly tech industry.

In addition to holding a conservative-skewed "summit" about social media, the Trump administration recently launched a tool to encourage people who think they've been unfairly silenced by social media networks to share their experiences with the President.

Regarding the White House’s so-called liberal-bias-fighting tool, Twitter said the effort is misguided.

“We enforce the Twitter Rules impartially for all users, regardless of their background or political affiliation,” Twitter said at the time. “We are constantly working to improve our systems and will continue to be transparent in our efforts.”