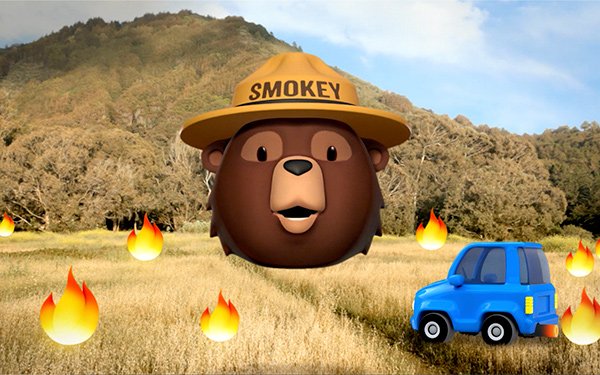 Smokey Bear is introducing his first animated emoji campaign as part of his 75th birthday celebration. Smokey represents the longest-running PSA campaign in U.S. history, as well as the longest pro bono relationship with an ad agency.

FCB has been donating time and talent for the entire 75 years.

As part of this year's initiative, the USDA Forest Service, the National Association of State Foresters and the Ad Council, collectively under the Cooperative Forest Fire Prevention (CFFP) Committee, are releasing new PSAs featuring Betty White.

White's voice is featured alongside a large animated Smokey head as she lectures about fire dangers outside of traditional wildfires. The ads end with the signature message —  “Only You Can Prevent Wildfires” — voiced by actor Sam Elliott for the last 12 years. (Coincidentally, Elliott shares his August 9 birthday with Smokey.)

Smokey has remained relevant throughout the decades largely through his ability to both evolve and stay true to his legacy. One way has been expanding his media presence along with popular culture, shifting from radio to TV and now social media. Smokey has also aligned with celebrities throughout the decades, first with notables like B.B. King, Barbara Stanwyck, Dolly Parton and Leonard Nimoy to more contemporary luminaries, such as Stephen Colbert, Jeff Foxworthy and Al Roker.

“Very few advertising icons have stood the test of time the way Smokey has, and thanks to our favorite bear, individuals across the nation know they play an important role in helping to prevent wildfires," says Lisa Sherman, President-CEO, Ad Council

Smokey will continue his messaging through birthday parties and other events with a variety of media partners, including Clear Channel Outdoor, Facebook and National CineMedia (NCM).

The famous bear will also return to the Macy's Thanksgiving Day Parade after his last appearance 25 years ago. His first debuted in 1966 and participated in the holiday spectacle every year until 1981.

Since 1944, wildfire prevention PSAs have run exclusively in time and space donated by the media totaling more than $1.63 billion. Today, Smokey’s catchphrase is recognized by 96% of U.S. adults, per the Ad Council.