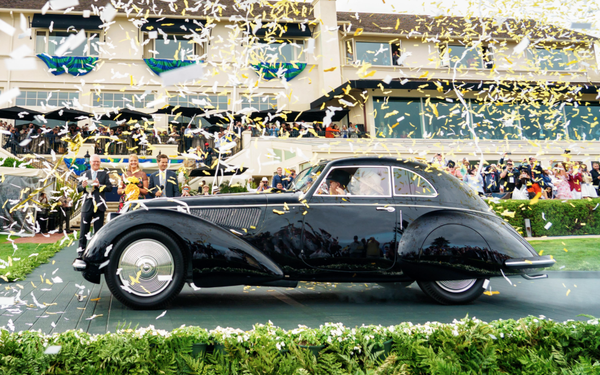 Two huge classic car events are happening this weekend across the country from each other and will likely attract very different crowds.

In suburban Detroit, tens of thousands of spectators and participants will parade their classic vehicles up and down the city’s main drag on Saturday for the 25th annual Woodward Dream Cruise.

According to Wikipedia, the Woodward Dream Cruise is the world's largest one-day automotive event, drawing about 1.5 million people and 40,000 classic cars each year from around the globe. If you’ve ever been stuck in traffic trying to get through the traffic generated by the event, it feels like many more.

The Detroit Big Three automakers have events planned around the celebration that started this past weekend with Motor Trend Group’s “Roadkill Nights Powered by Dodge,” which included legal drag racing.

Ford Motor Co. is the presenting sponsor of the event. On Saturday, the automaker will host Mustang Alley, where 1,000 Mustangs will line up for nearly a mile.

Across the country, an event with a very different type of energy will take place on Sunday as the finale to Monterey Car Week. Classic car enthusiasts consider The 69th Pebble Beach Concours d’Elegance the most prestigious event of its kind.

The charitable event, which draws a very refined 15,000 attendees, is held each year on the Pebble Beach Golf Links in Pebble Beach, California. It is open to both prewar and postwar collector cars, which are judged for authenticity, function, history and style.

One cool requirement is that the cars have to be operable, meaning the drivers must drive them onto the golf course very early Sunday morning. Hardcore enthusiasts, often including actor and collectible car enthusiast Jay Leno, are on hand for the Hagerty Dawn Patrol event.

Many luxury automakers — including Jaguar Land Rover, Mercedes-Benz, McLaren and Rolls-Royce — hold consumer events and set up displays adjacent to the golf course to plug their current lineup of vehicles. After all, classic car owners still need an “everyday” vehicle to drive to the grocery store or the dry cleaner.

Infiniti and MotorTrend Group are partnering again to present the second annual Japanese Automotive Invitational Aug. 16 to 18. Among a week of vintage automotive events, the JAI is distinguished as the premier experience dedicated to Japanese automotive achievements and the future of Japanese-inspired innovation and design. The three-day event will display Japanese automobiles from across brands and this year will celebrate Infiniti’s 30th Anniversary.

The Infiniti Inspiration concept line will be on display in the Infiniti Pavilion, adjacent to the JAI. This trio of concept cars will be shown together for the first time, representing the future of Infiniti showrooms.

It’s an interesting contrast to the parade of vintage cars and a reminder that as much as technology has changed the driving experience, the love of driving remains the same.