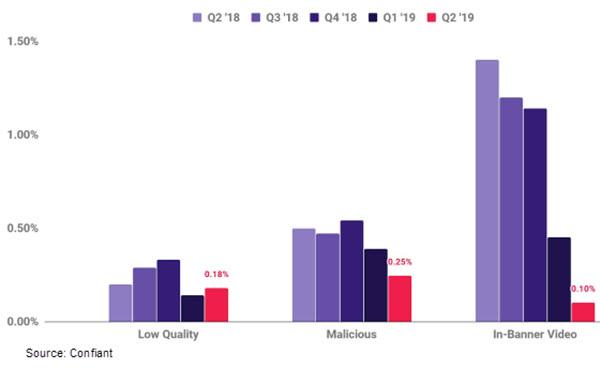 Amid all of the headlines about ad fraud comes some reasonably good news, for a change: Both malicious ads and surreptitious in-banner video ads were down significantly in this year’s second quarter.

That’s according to Confiant’s Demand Quality Report for the period. The real-time ad-quality verification vendor tracks the quality of programmatic advertising on an ongoing basis, using a normalized sample of more than 120 billion impressions.

Malicious ads — defined as creative that includes (usually obfuscated) Javascript that spawns a forced redirect or loads a secondary or tertiary payload for similar malicious purposes — fell to 0.25%. That’s down from 0.39% in Q1, and a high of 0.54% in Q4 2018.

“There continues to be a huge gap between the best and worst performers,” adds the report. “Among top SSPs, the worst performer is over 60 times as likely to deliver a malicious ad as the best performer.”

Also, weekends and holidays continue to experience a higher rate of incidents. The rate of malicious ads by day ranges from a low of 0.13% on Thursdays to a high on 0.44% on Sundays, by a factor of more than three times.

Most malicious ads are designed to force users to interact with phishing scams, but some perform “crypto-jacking,” or infect the user’s device to propagate botnets and other nefarious activities.

In-banner video ads, or IBVs — ads loaded within a banner as a display unit instead of playing within a media player, served in banners without the publisher’s (and often without the advertiser’s) consent — dropped to 0.10% in Q2.

“If this trend continues, in-banner video ads can be expected to be all but extinct by the end of 2019,” observes Confiant.

Now for the not-great news: The incidence of “low-quality” ad creative ticked up during the quarter, to 0.18%, from 0.14% in the first quarter.

However, that was still down significantly from a high of 0.33% in last year’s fourth quarter. (The low-quality stat excludes a heavy ads comparison, as that data was not available for previous reports.)

Low-quality ads are ones with creative violations across 16 different quality specifications selected by publishers. The dimensions include audio/video related violations, creatives probing for user’s geolocation, ad the network load of the ad, among others.