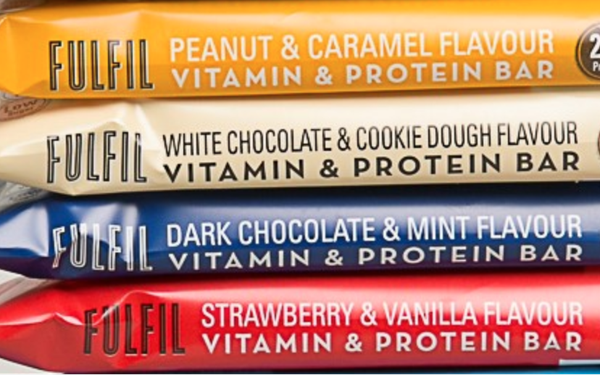 Starting with brands like PowerBar in the 1980s, followed by Clif Bar and now myriad others, snack bar offerings just keep on coming, fueled in part by acquisitions on the part of established CPG companies.

As with most things CPG, gaining distribution in an ever-expanding category is no small hurdle, limiting brands lacking big partners mostly to direct-to-consumer channels.

Earlier this week, Hershey said it had taken a minority stake in FULFIL Holdings Limited, the Dublin-based company whose high-protein nutrition bars under the Fulfil brand have made big inroads in markets like the U.K. and Ireland since 2016. It was the latest deal by Hershey’s C7 Ventures unit.

Fufil is one of the businesses that Hershey perceives as “sitting at the cross section of new consumer snacking needs,” Chief Growth Officer Mary Beth West said in a news release.

About U.S. distribution for Fulfil, which is available on Amazon and in 10 countries, Hershey directed questions to Fulfil. A Fulfil spokesperson said in an email that as part of its ongoing strategy review, “we will fully assess the opportunity in the USA.”

The last place someone with a sensitive stomach might expect to find probiotics is in a chocolate bar, but Australia-based Norti Nutrition wants to change that. Founded four years ago, Norti has been adding to its line of gut-healthy chocolate bars that it says are being made available in the United States. They contain both probiotics—the helpful bacteria that make up the human microbiome, or “gut environment”—and prebiotics. The latter feed probiotic cultures and are found in a variety of foods like bananas, oats and whole grains.

Norti bars can be purchased on the Norti Nutrition website but don’t show up on Amazon.

Once well-established brands like Rxbar gain wide distribution, they can go horizontal, which is what Rxbar has done this month with its announced expansion into the hot cereal category. RX A.M. Oats are made by adding gluten-free oats to the same core ingredients found in Rxbar and RX Nut Butter products: egg whites, fruits and nuts.

One of the smartest things RXBar founders did back in 2013 was to gain distribution in CrossFit gyms, where the product still can be purchased. Kellogg’s bought the brand for $600 million two years ago, and it’s also available now at major drugstore chains like CVS, plus major grocery retailers along with Whole Foods and Trader Joe’s.