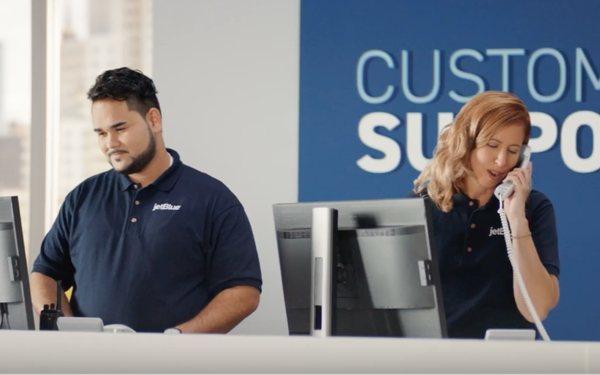 JetBlue is launching a campaign that offers a message to travelers everywhere: You deserve better.

It includes the tagline “Just Alright Doesn’t Fly Here" and showcases how JetBlue has revolutionized the air travel experience since its inception in 2000 by providing the most legroom in coach, seatback entertainment at every seat, complimentary brand-name snacks and award-winning customer service.

With a nod to the Wright Brothers who took flying to new heights, JetBlue created the fictional characters “The Alright Brothers,” crediting them for taking airline customer service to new lows. The effort, from MullenLowe, includes TV, social media, radio on music streaming services, digital and billboards.

Going above and beyond for customers has been an integral piece of JetBlue’s DNA, says Elizabeth Windram, vice president of marketing, JetBlue.

“This campaign is designed to shine a much-needed spotlight on the complacency that’s become an all-too-common part of the airline experience and show those who haven’t traveled with us before that there’s a better way to fly,” Windram states.

The effort will target New York, Boston, Los Angeles and Fort Lauderdale and run through mid-December. It is the airline’s first marketing campaign since “Air on the Side of Humanity,” which launched in 2013, and gave a voice to the most overlooked, unappreciated frequent fliers of all — pigeons — to showcase the struggles of air travelers.

The new videos include actual JetBlue crewmembers delivering the message that while bare-minimum experiences may have become the industry norm, those low standards would never “fly” on JetBlue.

“The Just Alright Treatment” shows the Alright Brothers ignoring customers questions and conspiring to do “the least we can do,” in contrast to JetBlue employees. Another 30-second spot, “Just Alright Beginnings” shows the Alright Brothers conspiring to limit legroom, entertainment and snacks. “The clouds will be their entertainment,” says one of the brothers. Finally, “Customer Disservice” shows the brothers praising the employee with the blankest expression and theorizing that if they don’t pick up the phone, customers will stop calling.

In other JetBlue marketing news, its logo is now featured on  the iconic Pepsi-Cola sign in Queens, New York. Through Oct. 1, the dual-branded sign will illuminate the city skyline and play up the two companies' partnership, announced in May.