New For Fall: Comedy 'Mixed-ish' Is Not Even Funny-ish 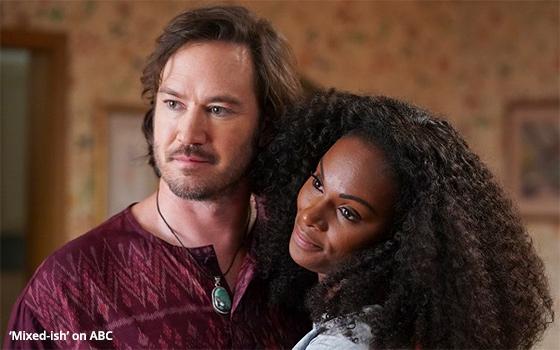 Race relations is emerging as a recurring theme of the new fall TV season.

On Monday night, a white businessman will develop a crush on a Nigerian-born nurse in “Bob ♥Abishola” on CBS. And on Tuesday night, the children of a white man married to an African-American woman will face social ostracism in “Mixed-ish,” a new comedy coming to ABC.

If it is not obvious already, “Mixed-ish” is a spinoff (in prequel form) of ABC's “Black-ish.” “Mixed-ish” is about the 1980s childhood of one of the “Black-ish” characters -- mom Rainbow Johnson, played by Tracee Ellis Ross.

In “Mixed-ish,” we meet her at an unspecified age, but perhaps on the threshold of teendom. The year is 1985, and Rainbow’s family has just fled the California commune where they had lived for the entirety of their children's lives.

In the premiere episode of “Mixed-ish,” the kids are challenged to fit into this new community where they now live -- a typical suburb.

The show operates under the assumption that in 1985, if a family of so-called “mixed” children (that is, children from parents not of the same race), suddenly moved into any “typical” suburban area, they would immediately be treated as social outcasts by every other kid at school -- black and white.

It is the kind of sweeping generalization that only a shallow, simplistic TV show would presume to make. The assumption on the part of this show's producers and network seems to be: If we say it is true that this ostracism was sure to have taken place in 1985, then the audience will have no choice but to accept it, nor possess the intellect to refute it.

The latter assumption might in fact be true. Today, it is almost universally assumed by a great number of people that the past -- whether the 1980s or the 1880s -- were periods in which all thoughts, reactions and behaviors were either wrong or, at the very least, not enlightened.

Thus, audiences are expected to laugh knowingly when the kids of this racially diverse couple come under unusually intense scrutiny by the other, non-mixed kids at school.

Of course, if audiences laugh in this knowing way, this might be the only reason to laugh at all. The premiere episode of “Mixed-ish” is a made-for-television comedy that possesses no funny moments whatsoever. It is so devoid of laughs (and, by extension, entertainment value) that it cannot even qualify as kind of funny -- funny-ish, you might say.

The show rankles right from the outset when we hear the voice of the present-day Rainbow character (Ross) narrating the story we are about to see. This is always a red flag for the TV Blog, which has long possessed a steadfast faith in the ability of TV shows to tell their stories through the judicious marriage of visuals and sound -- with none of the sounds being the voice of an off-screen narrator explaining what you are seeing with your own eyes.

The TV Blog has no idea whether “Mixed-ish” improves in subsequent episodes because none were provided. The show makes the TV Blog long for the not-too-distant past when sitcoms were about comedy, not commentary.