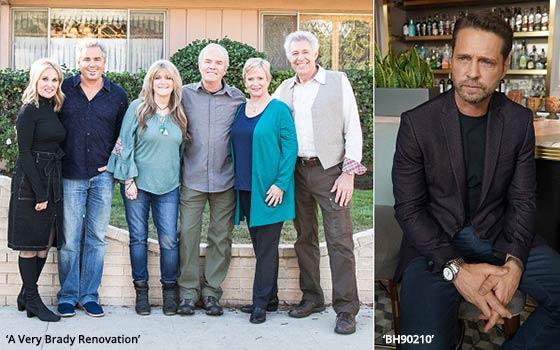 It is undoubtedly a complete coincidence that two of the most noticeable, newly introduced shows on TV just now required that the casts of both of them from long ago be reassembled.

It is also coincidental that the two shows and their casts were icons of their eras, although the eras and the generations they represent are wholly distinct from each other.

They are, of course, the early-’70s sitcom “The Brady Bunch” -- represented by this month's HGTV hit “A Very Brady Renovation” -- and the ’90s megahit “Beverly Hills 90210,” from which the entire surviving cast has been reunited this summer on “BH90210” on Fox.

Job 1 -- and for all intents and purposes, one of the key reasons why the two shows work -- was wrangling everybody from the original casts to join the party.

“A Very Brady Renovation” would not have felt complete if, for some reason, one of the six Brady kids (all pictured above left) had decided he or she wanted no part of it. And if Jason Priestley (above right) or Shannen Doherty had said no to this “90210” reunion, it would not have been nearly as effective.

But everybody said yes -- which might be less of a reflection on them than on the persistence (and possibly, the generosity) of producers and network execs who had the good sense to realize they needed all of these folks if either of these projects was to succeed.

This kind of effort can be classified under the general umbrella of “showmanship,” a practice which, when done best, is not characterized by half-measures. No doubt, corralling these casts took some doing.

Most of the Brady kids are not involved in show business anymore. These people have lives, and a producer or show creator never really knows at the outset of a reunion project how these people feel about the roles that made them famous -- roles they are more or less stuck with playing for the public for the rest of their lives, for better or worse.

Where the “90210” teens are concerned, indications were that various of the cast members might not have been too eager to reprise the roles they played as young adults, for the simple reason that they and their lives and careers have moved on.

Perhaps the storyline of this summer’s six-part “90210” reunion series -- in which the show's cast members play middle-aged, fictional versions of themselves in a self-deprecating way -- was necessary for getting these cast members on board.

The approach Fox made to making this show was smart. As the show turned out (it ended this week on Wednesday night), none of them needed to fear being embarrassed in any way for coming back to play the roles that made them stars a generation ago.

Meanwhile, HGTV is crowing that this week's premiere of “A Very Brady Renovation” was the highest-rated premiere in its history. The network provided no total-viewer amounts, but gave a 25-54 rating of 1.43 and a P2+ rating of 1.52. The network said the numbers represented a 160% increase in viewership levels over the same time period a year ago (Monday night from 9 to 10:30 Eastern).