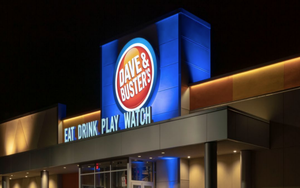 Restaurant/entertainment pioneer Dave & Buster’s runs some very profitable establishments -- a total of 132 in North America. But its same-store sales are sluggish, so it’s about to reload its mobile app while boosting its data-targeting capabilities and shifting some media spending from cable television to digital media.

D&B launched in 1982 in Dallas by combining food and drinks with a games arcade. Now it’s adding 50-foot LED WoW Walls to revitalize dining rooms for video viewing. It also recently introduced proprietary virtual reality viewing/gaming offerings, the latest of which will be Terminator VR, timed with the November launch of the latest “Terminator” movie.

When it launched, D&B was basically alone in the dining-plus-amusements space, enabling it to build an early lead. “At the same time, this trend and our success have attracted many more players in the space, and the overall market today is quite fragmented and competitive,” CEO Brian Jenkins said on an earnings call earlier this week.

Revenue increased by 8% in the second quarter, but same-store sales declined 1.8%. Part of that decline was attributed to the rollout of its VR offering in the prior-year quarter, which boosted business.

Opening profitable establishments isn’t D&B’s biggest challenge. Since 2011, the 29 new stores that have been open for at least three years have averaged annualized returns of 45% over their first three years, according to Jenkins. The overall goal is to essentially double the number of D&B locations to about 250 in the United States and Canada.

The chain’s main focus is on continuing to open new stores of varying sizes while improving dining experiences and increasing repeat guest visits. One of its new 17K formats, consisting of 17,000 square feet in Corpus Christi, Texas, opened in late 2018 and is on track to generate first-year sales of more than $8 million while generating a 35% profit margin, according to Jenkins.

At the Jefferies 2019 Consumer Conference in June, Jenkins said D&B hopes to increase repeat restaurant visits with its new app, which will support more than just the 17 locations that the existing version does. “Frequency is a very important focus for us,” Jenkins said.

Among other features, the new app will allow guests to use their phones to quickly purchase and recharge digital power cards — used to activate games —plus earn loyalty points. D&B will be able to deliver more targeted, personalized offers regardless of whether people are in-restaurant or elsewhere.

D&B continues to evolve its media mix to more effectively communicate its offerings and value. Having been a longtime spender on national cable TV, “We are meaningfully pivoting some of that spend over towards digital and increasing spend,” Jenkins said.