'The Strategist' Redesigns, Expands To UK 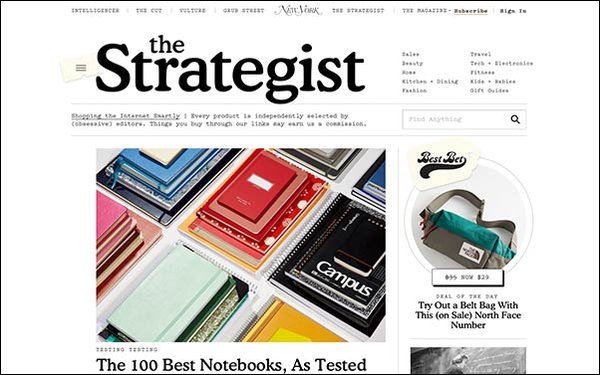 The Strategist also announced it is expanding to the U.K. next month, which will be New York Media’s first international expansion.

It will launch a standalone site with three London-based staffers, led by journalist and author Ailbhe Malone.

Content will be a mix of original posts and articles from the U.S.-focused site edited for the U.K. market.

Ian Adelman, Chief Creative Officer at New York Media, said the team looked at “the graphic roots of New York’s service journalism” and “the 1960s and ’70s catalogues of Habitat" for inspiration on the Strategist redesign.

“It’s so great that readers can finally — with one glance at this new homepage — understand the joy/utility that the Strategist offers; where you can find a months-long project ranking 100 notebooks, alongside a reported story on the best moustache wax,” stated Alexis Swerdloff, editor of the Strategist.

The Strategist’s new design and branding represents an “intersection of a smart journal and a dynamic catalogue,” Adelman added.

The design now creates a hub that showcases content for new readers, from the Strategist's columns to its time-sensitive pieces on sales.

The Strategist covers highly rated and popular products, providing affiliate links that give the company a cut when readers click to purchase.