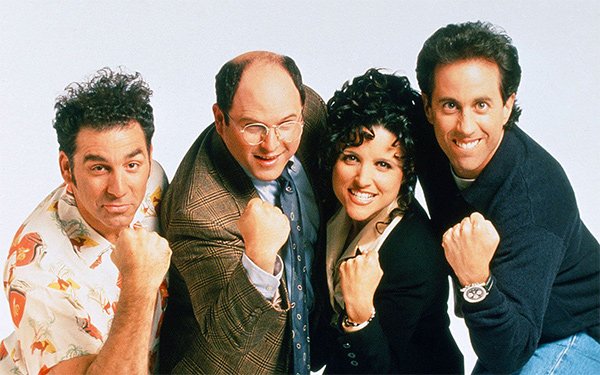 Netflix has acquired worldwide streaming rights to the 180 episodes of “Seinfeld,” starting in 2021.

The companies did not reveal the financial terms, but the five-year deal with distributor Sony is worth about $500 million, sources told The Hollywood Reporter.

Hulu has had domestic-only streaming rights to the iconic sitcom since 2015, through a six-year, $130-million deal. Amazon has had the rights in most other countries.

The “Seinfeld” rights acquisition is something of a coup: Majors including NBC, HBO, NBC and CBS reportedly vied for them for their own streaming services.

The win comes after the recent news that Netflix will lose the streaming rights to its two most-watched titles to new platforms set to launch next spring: “Friends” to WarnerMedia’s HBO Max as of 2020, and The Office” to NBCUniversal’s streaming platform as of 2021.

Those two deals had similar valuations, but only cover domestic rights, according to THR.

Netflix is already home to Jerry Seinfeld’s “Comedians in Cars Getting Coffee” shortform series and his standup comedy specials.

Long-running hit sitcom series are core use-drivers for streaming platforms — which is why Netflix reportedly paid $100 million at the end of 2018 to extend its “Friends” streaming rights through 2019, up from a reported $30 million per year in previous agreements.

Speculation about Netflix’s ability to retain its long dominance in the streaming sector has been rampant since recent announcements of upcoming streaming platform entries from the likes of Disney and Apple, as well as WarnerMedia and NBCU.

Netflix’s subscriber growth rate has slowed just as some of these giants are taking back streaming rights to their most valuable series for use on their own new services, and investing billions in producing new content for those platforms.

A just-released Horowitz Research survey found 45% of Netflix subscribers saying that they would consider cancelling their subscription to the service if networks such as NBC, Fox and AMC pulled their content from Netflix.

However, the survey also found 45% of TV content viewers saying they feel they know Netflix like “a close friend” -- the strongest brand association viewers have among the major TV network brand names (ABC came in second, with 27%).