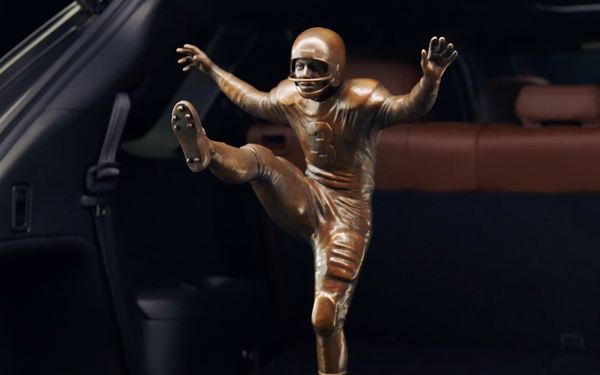 Mazda will highlight its new “Power of Potential” platform via a season-long partnership with ESPN and the National Football Foundation.

The aim is for Mazda to be known within college football as the brand that recognizes players who inspire others and uplift them to reach their greatest potential.

The campaign with ESPN features digital and television commitments including the official sponsorship of College Football 150 Year Anniversary Day,  New Year’s Six Bowl Games on ESPN and the 2020 National Championship. Featured halftime sponsorship will be highlighted every week of the season. The work was created as a collaboration between GTM and ESPN CreativeWorks, ESPN’s internal creative team.

The automaker is also the presenting sponsor of the William V. Campbell Trophy. First awarded in 1990, the trophy is named in honor of the late former chairman of Intuit and head football coach at Columbia University.

“The partnership with ESPN and the National Football Foundation enables Mazda to be known within college football as a brand that recognizes players who inspire others to reach their greatest potential," Bernacchi tells Marketing Daily.

"This aligns naturally with Mazda’s philosophy behind our Challenger Spirit. We entered this space armed with the insight that college football indexes highly with our Independent Achiever target audience. For them, ESPN is the top source for live sports, making its channels an ideal fit to amplify our Power of Potential platform. These are moments when our audience is most engaged and listening."

Throughout this college football season, ESPN will prominently feature past recipients of the trophy in national television spots leading up to the 30th presentation of the trophy during the 62nd NFF Annual Awards Dinner in New York City on Dec. 10.