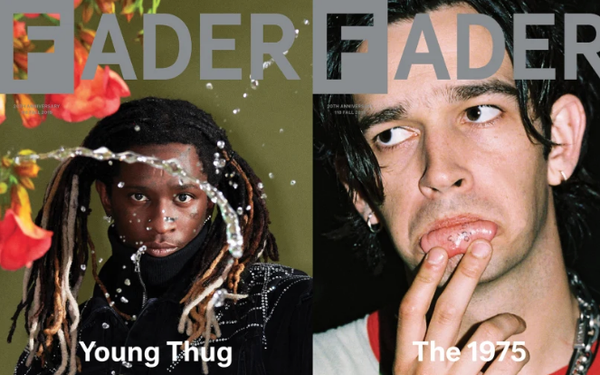 The Fader magazine is celebrating its 20th anniversary with its latest issue, out today. The issue has two covers, one featuring Young Thug and the other with The 1975.

The Fader has also teamed up with Vinyl Me Please and Goose Island to offer a limited edition, 12-inch vinyl album, with nine tracks from artists featured in the 20th anniversary issue.

The indie music and culture magazine primarily focuses on “what’s next” in music and culture — artists like Kanye West, M.I.A and The Strokes had their first magazine cover stories with The Fader, as have recent stars, such as Billie Eilish, Cardi B and Kacey Musgraves.

Rob Stone and Jon Cohen created the magazine in 1999. The two photocopied ads from existing magazines for the first issue, in an attempt to make The Fader look more official.

It has come a long way since then, president and publisher Andy Cohn told Publishers Daily. Now, the business is built on the quarterly print magazine, digital content on its website and social channels, video and film, a custom content studio, events and ecommerce.

“That’s how we thrive and stay in the business and grow — we are multi-pronged,” Cohn said.

The Fader sells branded merchandise and product collaborations on The Fader Shop, such as posters of every issue cover. Its Fader Fort event is in its 17th year.

The publication also has “straight digital advertising and regular media buys,” but without the scale of other publishers like BuzzFeed. “We try to push people to do things that are more engaging.”

Cohn, who has been at the publication for 16 years, started his career as an intern at Spin magazine when it was under Bob Guccione Jr.

His career took him to hip-hop magazine The Source, before joining The Fader in 2003, when it was one of the few big “counterculture” magazines focused on the music industry, according to Cohn.

Other big music magazines have “alienated their core audience" by chasing circulation, putting bigger and more famous people on their covers to charge more for advertising.

Cohn is proud of The Fader’s independence.

“We do not take one dime of outside financing,” he said. “We could’ve done a bunch of stuff to purchase traffic… and joined other people’s ad networks, but we decided to go it alone and do it ourselves.”

That means less pressure on The Fader to constantly grow circulation and meet certain revenue goals, for example, and more freedom to experiment and try new things.

“If six years ago we relied on Facebook and put all our money there, we would be screwed,” Cohn said. The strategy is to try new things, but not go “all in.”

“We have been platform-agnostic for a long time,” he added. “We are listening to the audience and listening to where they are.”

That sometimes means putting full feature stories on Instagram to reach young readers, or putting up issues for free on iTunes.

While other legacy music magazines have tried to appeal to both millennials and loyal boomers, Cohn said The Fader focuses on youth culture and the up and coming in the music industry. “We let readers fade out of Fader.”

The Fader has pre-sold about 250 copies of the special edition vinyl album, which ships out next month.

Created in partnership with Goose Island, the album has beer poured into the resin. Goose island also has an insert that pairs its beers with each track in the album.