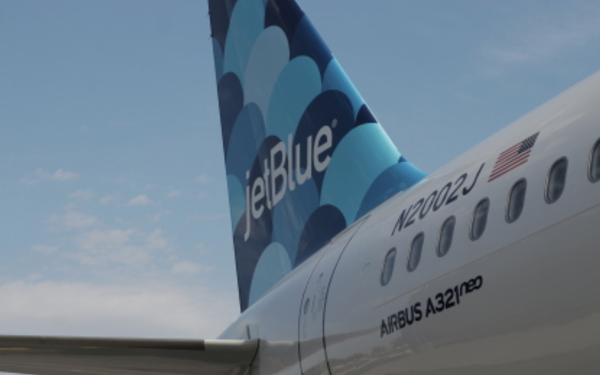 JetBlue created an interactive 360° video, which is on YouTube, to show the plane’s interior.

Included are the widest seats available for this aircraft type, as well as what the airline calls a state-of-the-art interior, “designed to lighten and brighten customers’ journey and facilitate seamless living -- the idea that you don’t have to stop living your life just because you’re in the air.”

Seatback pockets have been redesigned with an elastic “gadget panel” stowage, mesh pockets for water bottles or personal devices and a larger pocket for laptops.

At a gathering spot onboard called The Pantry, customers can stretch their legs and grab extra snacks throughout the flight.

The airline is expanding its free Wi-Fi coverage to more than 99% of JetBlue’s route network, including over water and international cities.

JetBlue has 85 A321neo aircraft on order including 13 long-range aircrafts for service to London from New York and Boston beginning in 2021, as well as 13 extra long- range aircraft, which the airline says will offer flights to a variety of European cities.