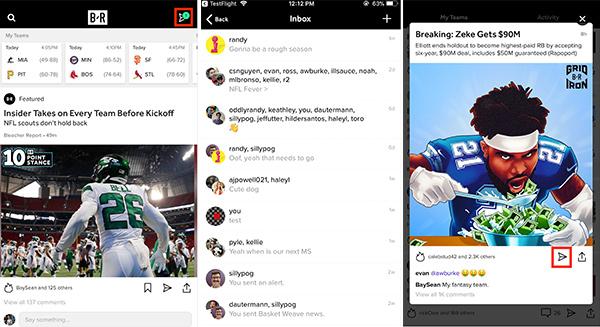 According to the sports media company, the average Bleacher Report user spends over two hours in the app every month. Now it's enhancing it — with direct messaging.

The B/R app has been downloaded more than 20 million times.

Bleacher Report says it has over 3 million daily active users — 45% of all B/R app users read it daily.

The “DMs” feature, which launches in beta next week, allows users to group chat with up to 16 members. They can share articles, alerts and highlights throughout their conversations.

The idea is that instead of texting friends during a game, users can now do that within the app, fueled by Bleacher Report sportscontent.

The feature follows a set of other popular communication features in the app that have built audience interaction, including trending comment threads and "Ask Me Anythings” (or “AMAs”) with athletes.

The first AMA was hosted by basketball coach Ron Artest (now known as "Metta World Peace") in May.

The AMAs average more than 5,000 engagements since the feature has launched, according to the company.