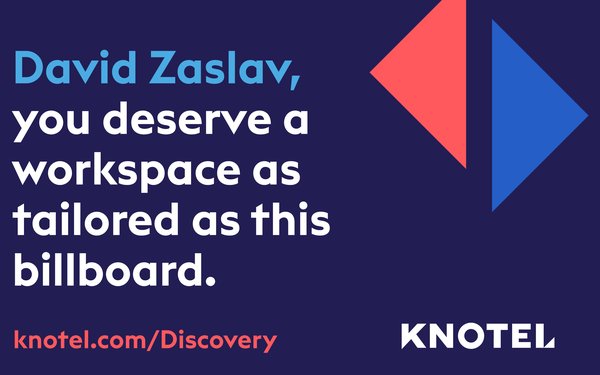 As WeWork’s struggles continue to make headlines, a competitor in the growing flexible workspace market, Knotel, has launched its first major marketing campaign.

The new effort, from agency Duncan Channon, comes shortly after the company raised $400 million in funding over the summer.

The campaign, “Tailor Made,” targets CEOs such as Fox’s Lachlan Murdoch and Discovery’s David Zaslav, telling them they “deserve a workspace as tailored as this billboard.”

The messages are being delivered via personalized billboards that will be driven past the New York offices of the aforementioned CEOs and six others. Each board will include a link to a customized landing page with a dynamic 3-D model of an office layout tailored to that company.

The idea is to reinforce the premise that Knotel is serious about tailoring flexible work spaces for global enterprises.

Experiential elements of the campaign are planned for 2020.