Will 'Hong Kong' Censoring Stop Gamers' Protests? Now You Can Bet On It 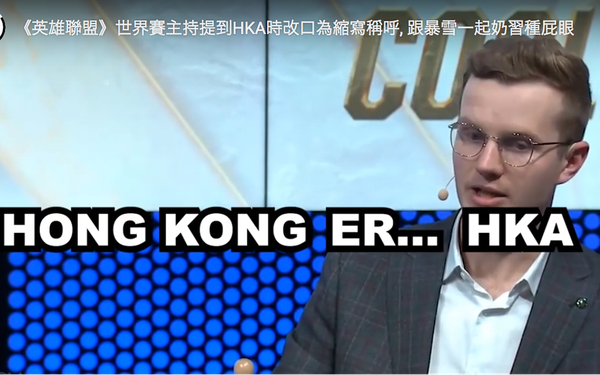 The League of Legends World Championship final rounds begin in Berlin Saturday, and thousands of fans will have real money on the outcome by betting on it. Esports wagering is a fast-growing industry, but events of the last week prove the sport is political, too.

Game maker Activision Blizzard banned a Hong Kong player and stripped him of his earnings after he exclaimed, “Liberate Hong Kong! Revolution of our times” in a livestream video after his victory.

Will another player dare make a political statement? Do you wanna bet?

The online odds-making site SportsBetting.ag added three questions that let gaming bettors put their money where (possibly) their allegiances are.

At the moment, though, protest speech is not favored at the Worlds, as the championship is colloquially known, and that includes the team called Hong Kong Attitude.

“Will any team make a statement in support of Hong Kong?,” asks SportsBetting's first question. The odds on are 1-3 that will happen, meaning you’d have to bet $3 to win $1.

"Will any member of Hong Kong Attitude make a statement in support of Hong Kong? (during the live stream)” SportsBetting puts those odds at 1/5.

Then the question is turned around a bit.

“Will any member of a . . . team make a statement in support of China with regards to Hong Kong?"(during the live stream). Odds are just 1-8 that could happen.

Those odds, which could change, and other more gaming-like bets are on display on the SportsBetting.AG site .

Marketing Daily asked SportsBetting to lay odds that Blizzard/Activision sales will be affected by its actions toward the Hong Kong protest. That’s iffy. Adam Burns, the oddsmaker, put that possibility at just about a wash, positing you’d have to bet $1.50 to win a buck.

Since the incident, the company has been heavily criticized, and many gamers are protesting.

But the free speech clamp seems to be catching. According to the website Kotaku, League of Legend's eSportscasters earlier this week stopped themselves from saying “Hong Kong Attitude” in reports and instead scalled them “HKA.” (A damning YouTube video has cataloged some of the corrections.)

Ryan Rigney, a spokesman for Riot, which owns the League of Legends franchise  later tried to make amends, suggesting the reporters said "HKA" on their own, not under orders.

He tweeted,  “To make this as explicit as possible, we aren't telling anyone to avoid saying 'Hong Kong.'" We'd just rather the team be referred to by its full name. There's been some confusion internally about this as well and we're working to correct it.”

He added later, “One more personal note on this: I think everyone is very sensitive to this issue right now given the events of the last week. We should have better prepped our [sports]casters, and we’re reiterating this policy to them today.”