Get Set For 'Watchmen': Vigilante Armies At War On HBO 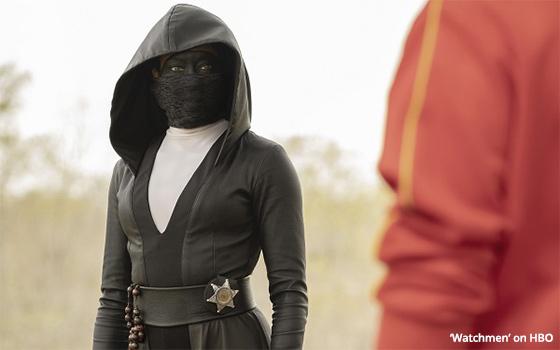 In the alternative universe imagined by the creators of “Watchmen,” premiering this weekend on HBO, the President of the United States is a venerable, politically liberal movie star with the initials R.R.

It is one of many touches encountered in both the foreground and background of this fanciful new drama series that enliven the experience of watching it.

Watch and listen closely: Did someone just refer to an enclave of white supremacists in a corner of the local area as Nixonville? I believe they did. The reference was not completely fair to the late President Nixon, but in the peculiar storytelling of “Watchmen,” anything is possible.

Among other phenomena, the community depicted in the show -- basically, the city of Tulsa, Oklahoma, and its environs -- is occasionally bedeviled by sudden downpours of squid falling from the sky. Oh, well, some locations get hail the size of tennis balls. In this alternative Tulsa, it's raining squid.

What's the deal with these occasional squid storms? One of them occurs quite conspicuously in this weekend's premiere of “Watchmen,” but it comes and goes without explanation.

The local folk seem to take it all in stride, although it is a nuisance to hose down the car, driveway and patio after these squid impacts.

Falling squid aside, the principal conflict in “Watchmen” has to do with a powerful and far-flung white supremacy movement that is engaged in an on again, off-again war with local police. As the series gets underway, the war is on again.

The two are like heavily armed, opposing armies. The war they are fighting is so violent that the police in this alternative Tulsa wear masks and operate under the cloak of anonymity so that they and their families cannot be targeted by these white supremacist vigilantes.

So who are the “Watchmen”? This is not quite clear in the premiere episode, although in this war, we are presumably supposed to root for the police army. They are the ostensible “good guys” of this good vs. evil story.

But in some ways, the choosing of sides is not so simple, as this police force possesses vigilante qualities too that are encompassed in the figure of one such masked fighter -- the female vigilante pictured above, played by Regina King.

According to HBO, “Watchmen” has been adapted from a graphic novel -- which is where this show's alternative universe was first devised. Graphic novels are often the source of this kind of stark, dark, fantasy-adventure content.

At the very least, this kind of source material would seem to be a filmmaker’s dream, since it provides all sorts of opportunities for imaginative cinema.

While “Watchmen” might prove too dark or violent for some, it is, at the very least, a visual success. And isn’t that what television is all about?