Dem Debates Are Like Reality TV, But Not In A Good Way 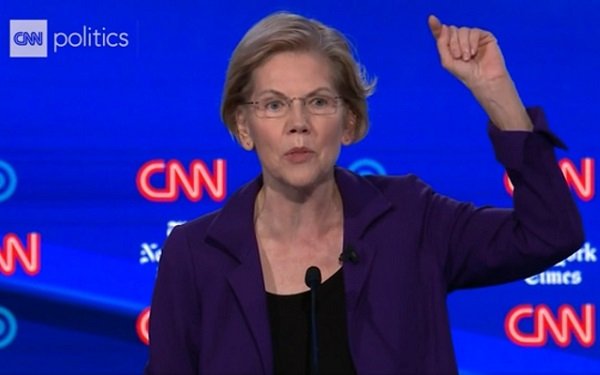 One of the most enduring reactions people have long expressed when watching reality TV shows and some of our more lurid daytime talk shows is a variant on the question: Who are these people?

Related questions include: Why did these people agree to go on national television to talk about their tumultuous, even incestuous private lives on shows like “Dr. Phil” or “Maury”? Or, why would anyone agree to go on [fill in blank with show title]?

This last question is the one people ask each other when they encounter any one of TV's more bizarre reality shows such as “Naked and Afraid,” for example, on Discovery, or “90 Day Fiancé” on TLC.

While watching Tuesday night’s sprawling Democratic Debate on CNN, it dawned on me that the same sorts of questions were forming in my brain about the 12 participants on stage at Otterbein University in Ohio.

Who are these people? I asked myself. And what drives them to campaign for president and participate in these exhausting prime-time debate spectacles? Or more to the point, what makes any of them think they will look or sound good, or otherwise come across as attractive in these testy three-hour argument marathons?

We columnists -- whether media columnists or political commentators -- often come at these post-debate analyses from the standpoint of who won or who lost. These assessments are based on purely subjective criteria -- basically, who was naughty and who was nice, who connected and who did not.

But after Tuesday's debate -- the fourth one of these nighttime debate slogs since last June -- no such “winner” emerged. Nobody “looked good.” Nobody inspired. Nobody looked happy. Indeed, if this week's debate demonstrated anything, it was that in today's Democratic Party, happy warriors need not apply.

Instead, it is attack, attack, attack. Attack the president and attack each other. Point fingers, raise fists, grimace and frown (such as Elizabeth Warren, pictured above). After watching and listening to these Democrats complain about conditions in this country for three hours, a viewer can form the impression that for them, the United States of America is little more than a vast gulag stretching from sea to shining sea.

When it comes to media messaging, this week's debate transmitted a series of unconstructive messages, including: The Democratic Party is not united, Democrats are angry and bitter, and Democrats are pessimists.

This last one might be the most crucial because optimism has long been a trait that has propelled some candidates successfully into the White House. It would not hurt the Democrats to have a candidate who can not only unify the party, but is capable of sincerely expressing a sense of hope and gratitude for the American way of life.

Unless I missed it, this was not a message that was top-of-mind for the Democratic debaters Tuesday night on CNN. Instead, the candidates seemed more hellbent on establishing themselves as modern day Robin Hoods who would take billions from the rich and give it to the poor.

As well-meaning as their talk might be about issues such as universal pre-K, childcare and health coverage, along with such issues as lifting millions out of their indebtedness for college loans, many people watching these debates know full well these ideas are unworkable.

And yet, the Democrats on display Tuesday night played a continuous game of “Can You Top This?” with wonkish proposals that hardly seemed credible.

And then there was the sheer number of candidates. We all realize this group will be winnowed down to one next summer. But it would be constructive for the Democrats to unify behind a single candidate sometime before that.

Tuesday night's debate even had a new candidate -- Tom Steyer, a billionaire gadfly. On the crowded stage this week, he joined the Democrats' other outlier and non-politician, Andrew Yang, another rich guy who is best-known for his various plans to give away money to every American.

The presence of such people, who have zero chance of advancing to the nomination, only sows confusion. Aren't the Democrats the party of attacking rich people and advocating for reducing the role of “big money” in our election process? If so, then why are these two guys here?

The next Democratic debate is scheduled for Nov. 20 in or around Atlanta. Perhaps between now and then, the Democratic powers-that-be will begin to realize that they need to put on a better show because that's what these debates are. And so far, “The Democratic Debate Show” is among the most disappointing series to come along all year.

television
3 comments about "Dem Debates Are Like Reality TV, But Not In A Good Way".
Check to receive email when comments are posted.
Read more comments >
Next story loading