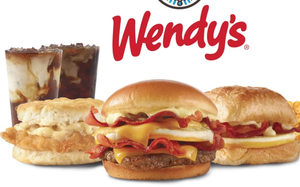 The menu will be sandwich-based and simple when Wendy’s takes on the breakfast daypart in early 2020, an effort fueled by learning from myriad operational mistakes dating to the chain’s previous regional breakfast offering.

For starters, the old breakfast menu contained as many as 45 unique stock-keeping units compared to 18 in the new rollout.

“That’s a massive difference in simplifying our operations and what it takes to get these restaurants open,” he said.

In addition, franchisees had to spend up to $10,000 in equipment to offer breakfast food. “Our new approach has no equipment investment for our franchisees to get involved.”

“It actually only takes two people to get the restaurant open in less than an hour to be ready for this daypart,” said Kane. “And that’s why we’re able to keep the break-evens a lot lower than they have been historically.”

Finally, offering breakfast regionally resulted in “really fragmented media plans driven at the local level," he added. Now we’re going to be able to put full, incremental national media power behind the breakfast daypart, and that’s going to be where the significant unlock really happens.”

The new breakfast menu is largely sandwich-based and includes croissants, biscuits, classic egg sandwiches and side orders, along with a proprietary coffee blend, carbonated soft drinks, juices and lemonades.

According to location analytics provider Placer.ai, although McDonald’s sees most of its visits in the afternoon, breakfast still makes up 25.9% of overall daily traffic.

“And this is the critical opportunity that exists for Wendy’s,” Placer.ai marketing manager Tali Rozenman noted in a recent blog post. “By delivering a strong breakfast offering, the brand has the chance to maximize their retail footprint by extending its peak period into the morning.” Only 10.7% of Wendy’s visits happen between 6 a.m. and noon, compared to 27.6% at Panera.

Asked whether Wendy’s would consider serving breakfast throughout the day and night, Kane responded, “Over time, that might be something that we choose to explore.”

Aside from the breakfast menu, Kane divulged that Wendy’s has been experimenting with a black bean burger and is in the final stage of testing it. He said it could be launched “as early as next year.”