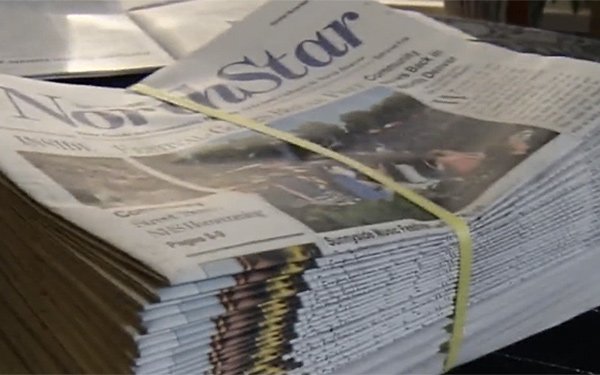 Ten years ago, The Rocky Mountain News shuttered, while The Denver Post has endured serious cuts to staff and resources by Digital First. Around 30% of its staff was laid off in April 2018 and current journalists are working on expired contracts.

To fill some of the local news gap, two candidates who lost their bids for Denver City Council are bring a local monthly newspaper to northwest Denver.

The Denver North Star published its first edition October 15. It also has an online site highlighting community politics and voices.
The newspaper is the creation of copublishers Sabrina D’Agosta and David Sabados. They lost the election, but share a desire to keep the community informed.

Yesterday, 29,000 papers were delivered door to door to homes and local businesses. Another 1,000 are available at newspaper boxes around Northwest Denver. The next edition of Denver North Star will be out in mid-November.

“It was hard for voters to differentiate between the candidates. We saw an opportunity to come back and tell people what was going on in the community and give them more in-depth news in the neighborhoods,” D’Agosta, a former communications executive for the Denver Public Schools and the State of Colorado, told Channel 4, CBS Denver.

Sabados is a principal in the Compass Strategy Group, which helps navigate political campaigns.

The North Star is targeting particular neighborhoods, west of I-25 from West Colfax to Regis. That’s the area once served by The Denver Tribune, which folded in 2017.

“We could not do this if it wasn’t for the fact that we’ve had advertisers come on,” D’Agosta told CBS Denver.

Other publications have also sprung up in the wake of Denver Post cuts.