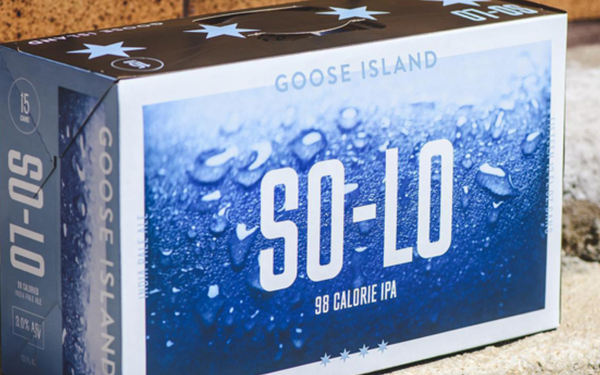 Goose Island, the first craft beer maker that Anheuser-Busch acquired (in 2011), is introducing an IPA called So-Lo,  that as its name implies, will target drinkers who want a little less.

While there’s a lot to like about craft beers, there are a few things that aren’t everybody’s cup of tea, to mix metaphors. Generally, they’re high in calories and carbs, and the alcohol content can be higher than some drinkers might prefer.

Goose Island isn’t the only craft brewer discovering there might be a market for low-calorie, low-alcohol brews among craft beer fans. Four other low calorie/low ABV beers have launched or will soon, according to Sightlines.com: Abita’s Hop 99, Oskar Blues’ One-Y, Saranac’s IPA 100 and Dogfish Head’s Slightly Mighty IPA.

According to the website Brewbound, the beer So-Lo is already a big seller in Chicago, Goose Island’s hometown. So-Lo will be available nationally as of Jan. 1.

The surging popularity of spiked seltzer drinks like White Claw is at least in part because they have a little less of everything.

Most of the lower-alcohol brands have around  4% ABV, and they’re low in calories and carbs,  So-Lo may be going after the same market, just the way Miller Lite and Bud Light offer an alternative to mass-market premium beer brands.

Beers with less alcohol are often perceived as too watery, because that’s exactly what has replaced the alcohol.

But the millennial and Gen Z generation seem to be drinking less. The Wall Street Journal reports non-alcoholic beer sales have gone up nearly 4% in the last five years, and some social scientists attribute part of the move away from alcohol to the 24/7 presence of social media that can capture videos of drunk people at their worst.

Lots of craft beer drinkers rued the day A-B acquired Goose Island in 2011, but its beers still get high marks, despite being owned by the biggest beer company of them all.